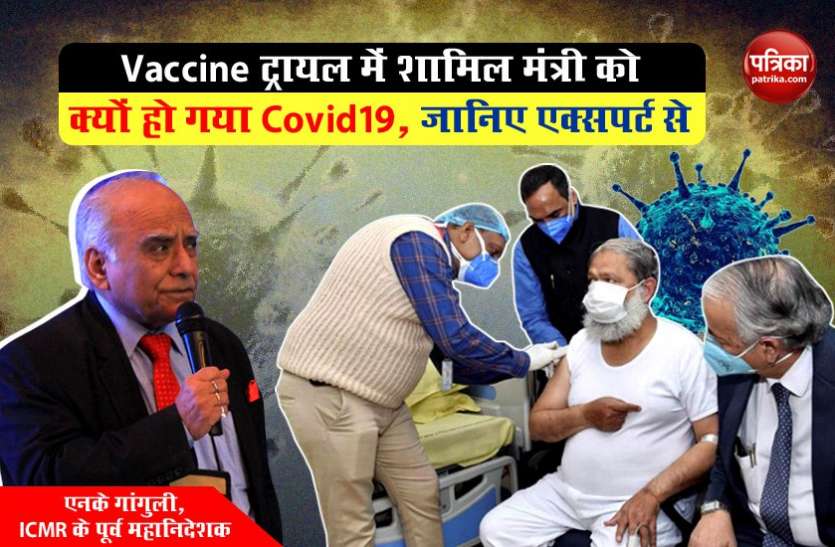 Why Covid19 gets minister involved in vaccine trial, know from experts

“No matter how big VIPs are, but be careful in trials”

Haryana Health Minister Anil Vij, who was involved in the trial of Covid19 vaccine being developed in India, got corona. Since then, many kinds of questions are arising in the minds of people about taking vaccines. Mukesh Kejriwal’s conversation with former Director General of the Indian Council of Medical Research (ICMR) and Chandigarh PGI Emeritus Professor NK Ganguly

————————
“In this trial it is not seen whether the infection will occur after vaccination. Rather, the end point is that even if an infection occurs, it will not let you get sick if you get immunity from it. “

Worried about the vaccine from this incident?

It should be understood that only trials are going on. This is a double blind trial, in which half the people are not given the vaccine. The study will be completed only then you will know how effective it is. No matter how VIP the person involved in the trial is, he should take complete care.

Will we get a safe vaccine?

There has been a good immune response in the first and second phase trials of this vaccine. Also, PM Narendra Modi and regulatory agencies have assured that any vaccine will be approved only when it is found safe. Do not be apprehensive.

How did Corona happen despite taking the vaccine?

The main conclusion of the study is not whether the infection will occur after application. Rather, the end point is that even if an infection occurs, it will not let you get sick if you get immunity from it. Also half the people are given placebo.

Similarly, the immune response starts around 14 days after the first dose. But this vaccine has its full effect only two weeks after the second booster dose.

What went wrong in this case?

Detailed counseling is done first for the participants in the trial. All the information about what to do and what not to do is given in their understandable language.

The most important thing is that no matter how important a person you are, you cannot get a vaccine until emergency approval is achieved. Before that you are only being tried.