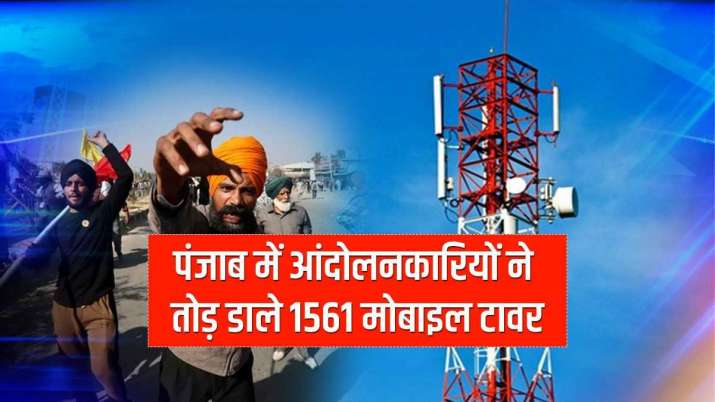 Why are farmers breaking the mobile towers of Jio, revealed

new Delhi. Reliance Jio, the telecom company of billionaire businessman Mukesh Ambani, has written a letter to Punjab Chief Minister Captain Amarinder Singh and the Director General of Police of Punjab, demanding protection for Jio’s mobile towers in the state. It is worth mentioning that the mobile towers of Jio are being damaged by some protesting farmers against the new agricultural laws for more than a month, in protest against Mukesh Ambani in Punjab, disrupting telephone services in the state The news is coming out.

Reliance Jio Infocomm has written in a letter to the Chief Minister and the DGP that some of the anti-social elements in the state are disrupting service by damaging their mobile towers under the guise of farmer protests. The company has in the letter sought to provide protection to Jio mobile towers.

Some of the towers that have been damaged during the last few days have been repaired by Jio. As of Tuesday afternoon, 826 sites were closed. Towers were damaged in places like Amritsar, Bathinda, Chandigarh, Ferozepur, Jalandhar, Ludhiana, Pathankot, Patiala and Sangrur. Jio has more than 9,000 mobile towers in the state.

Because of this, live is on target

Farmers believe that Mukesh Ambani and Gautam Adani will benefit the most from these agricultural laws. For this reason, the towers of Ambani’s telecom company are targeted by the farmers. The process of targeting mobile towers in Punjab by farmers opposing three new agricultural laws and those supporting them continued on Tuesday.

63 towers were damaged on Tuesday. Punjab Chief Minister Captain Amarinder Singh on Monday directed the police to take strict action against those who targeted mobile towers. The Chief Minister said that he will not allow anarchy to arise at any cost in the state and no one will be allowed to take the law into his own hands. Singh said he appealed several times in this regard, but it was ignored. Because of this, they have to tighten their stance.

Normal life will be affected

The Chief Minister said that if the mobile services are affected, it will affect the common people, students, professionals working from home and banking services.