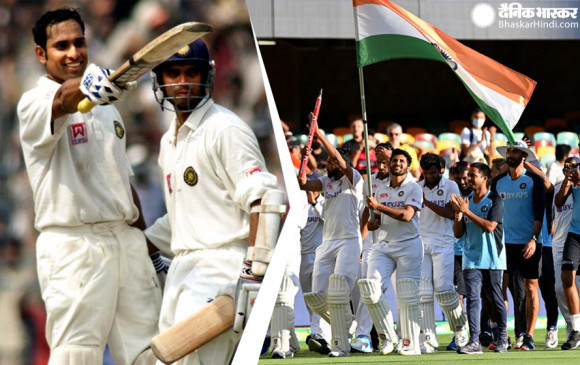 Digital Desk (Bhopal). India beat Australia by three wickets in the fourth and final Test match played at the Gaba International Stadium here on Tuesday, forcing them to face defeat on this ground for the first time in 32 years. Australia was invincible on Gaba for the past 32 years. He was last defeated by the West Indies in 1988. After that, India now defeated the hosts on this ground. This is not the first time that India has stopped Australia’s winning chariot. India has stopped Australia’s winning chariot at different times in international cricket.

The first such opportunity came in 2001. Australia had 16 consecutive Test wins and was fully committed and capable of retaining its invincible order. But Kolkata’s Eden Gardens Stadium again witnessed a match when not only Australia’s victory was broken but also the most spectacular victory in Indian cricket history.

Rahul Dravid and VVS. Laxman wrote the story of the Australian defeat and India beat Australia even after playing follow-on. After this, in 2008, India stopped the winning streak against the Asian teams of Australia in Waka. The Indian team, captained by Anil Kumble, defeated Australia by 72 runs in a Test match played at the Waka ground in 2008, making it the first team in Asia to defeat Australia on this ground.

Waka’s ground was Sydney. In 2016, India defeated Australia by six wickets in the ODI match played here and put the brakes on 19 consecutive wins at their home. After this, the ground of Gaba where Australia had not seen defeat for 32 years, but once again the Indian team stopped another unstoppable series.

India became the number one team of Test …

The Indian cricket team reached the first place in the ICC World Test Championship on Tuesday. India defeated Australia 2-1 in the four-match Test series, with India retaining the Border-Gavaskar trophy.

Australia won the first Test played in Adelaide. In this Test, the Indian team was piled on for 36 runs in the second innings. After this, under the captaincy of Ajinkya Rahane, the team won the Test match in Melbourne and Sydney drew the match showing tremendous game. After this, winning the series by three wickets in the decisive Test match in Brisbane, also named the series.

The reason for India coming in first place is the stunning victory in Brisbane. India will now have to win the four-match Test series with England 2–0 and will secure their place in the final of the Test Championship at Lord’s in June. The Test series between India and England starts in Chennai from February 5.