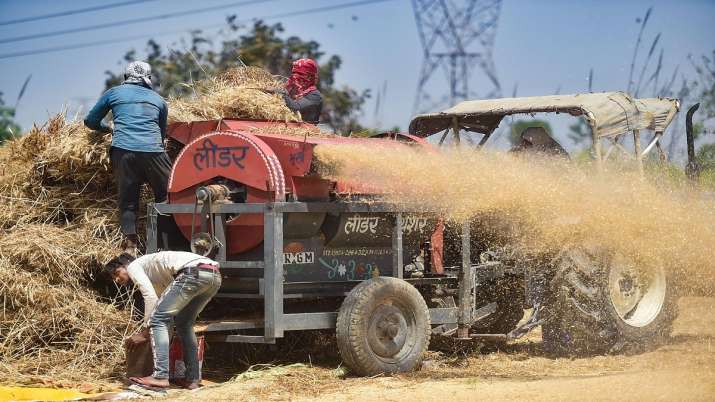 New Delhi. Food and Public Distribution Department Secretary Sudhanshu Pandey said on Monday that a total of 337.95 LMT wheat has been procured till May 9, with procurement running smoothly in Rabi marketing season 2021-22, while 248.021 LMT wheat was procured last year. Went. He further informed that about 34.07 lakh farmers have been benefited as compared to last year which was 28.15 lakh last year.

He said that the procurement has been done through 19,030 procurement centers across India. He said that farmers are now receiving direct benefits against the sale of their crops across the country without any delay. Secretary said that out of the total DBT payment, so far 49,965 crores have been directly transferred to the farmers’ account and these have been done for the purchase of wheat. He further explained that Rs 21,588 crore in Punjab and about Rs 11,784 crore in Haryana have been transferred directly to the farmers’ account.

Secretary Pandey said that the Pradhan Mantri Garib Kalyan Anna Yojana is being implemented for a period of two months i.e. May and June, 2021. According to a similar pattern, additional foodgrains will be given to about 80 crore beneficiaries at the rate of five kilograms per person per month. Government of India will bear all the expenditure of more than Rs 26,000 crore.

He said that the department is constantly reviewing the scheme and timely delivery of food grains in a transparent manner through EPOS devices after giving wide publicity and following all the safety protocols related to Kovid-19 as per the advisories issued. Working closely with all states to ensure delivery. A meeting in this regard has also been held on 26 April on behalf of the Secretary and on 5 May 2021 with the Joint Secretary.