Jay April 12, 2021
New Delhi. Apart from Vishnu Saravanan, the pair of Ganapathi Chengappa and Varun Thakkar were able to add a new chapter to the history of Indian sports by qualifying for the Olympics through the Asian qualifiers in Oman, as it would be the first time that the country’s four sailors in the Games to be held in Tokyo Will participate On Wednesday, Netra Kumman became the first Indian woman cellar to qualify for the Tokyo Games. He qualified in the laser radial event through the Musanah Open Championship. The competition was the Asian Olympic qualifying tournament.

For the first time, India will compete in three events in the Olympics. Till now, India has challenged in only one Olympic event, but on four occasions, two of its cellars have been successful in making it a place in the Mahakumbh of the Games. Capt. Jitendra Dixit, Joint Secretary of Yachting Association of India told PTI, “Yes, history has been created. Four Indian sailors have qualified for three Olympic events. This is the maximum number of qualifying cellar as well as the competition. ”

He said, “Netra qualified on Wednesday and today the pair of Vishnu and then Ganapathi and Varun qualified.” Hard work is the result. Tomas told PTI from Oman, “Congratulations to our champion players for taking this historic day and Indian Sailing to a new level. The coach also thanked the Sports Ministry, Sports Authority of India and Yachting Association of India for their continued support.

Tomas said, “Personally, I hope that this will be the beginning of a new era in Indian sailing. The cellar and the community behind them is fantastic. The time has come for them to make their mark and shine at the local and international level. On Thursday, Saravanan Laser became the first Indian to qualify in the Standard Class. He defeated Thailand’s Kirati Bualong and won the Olympic quota by finishing second overall. Saravanan had 53 points while Bualong had 57 points. Singapore’s Ryan Lo Jun Han topped the table with 31 points. Later, Chengappa and Thakkar pair topped the points table in the 49er ER class, making it to the Tokyo Games. Both of them won the bronze medal at the 2018 Asian Games in Indonesia. Sports Minister Kiren Rijiju tweeted, “I congratulate Indian players Netra Kumman, KC Ganapathi and Varun Thakkar who qualified for the Tokyo Olympics Sailing Competition. I am particularly proud of netra quota, who is the first Indian woman cellar to qualify for the Olympics. ”

Rijiju had earlier tweeted congratulating Saravanan, “I congratulate Vishnu Saravanan who qualified in the Tokyo Standard Laser Standard Class Sailing event through the Musanah Championship. Our players are making a mark in all sports. “In the 49ers’ ER class competition, two players pair up, while the laser class is a singles event.

In the laser class, two sailors can make it to the Tokyo Olympics, while a team in the 49er class can qualify. Saravanan, who was in third place till Wednesday, won the medal race on Thursday and secured the Olympic quota with a second place overall. He scored 53 points. Dixit said, “Till Wednesday, Vishnu was in third place after Thailand’s cellar, though both had similar marks. Today, Vishnu finished first in the medal race and therefore remained above the seller of Thailand in the points table. ”

Dixit said, “In the laser class, two sailors made it to the Olympics and Vishnu finished second. Singapore’s sailor was ahead of Vishnu today and therefore Vishnu could not beat him (from the top position). Was successful. Emma Savlon of the Netherlands topped the overall table with 29 points despite finishing fourth in the medal race on Thursday. 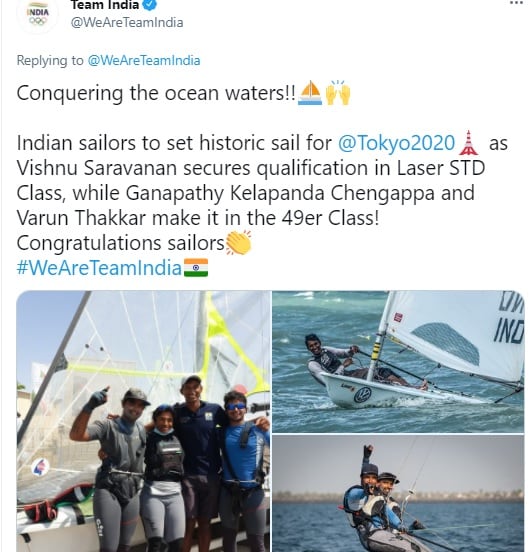 Earlier on four occasions, two Indian cellars have qualified for the Olympics but they did so in the same competition. India will participate in more than one event in Tokyo. The pair of Farrukh Tarapore and Dhruv Bhandari competed in the 470 class in 1970 while Tarapore and Kaili Rao competed in the same event in the 1988 Games. Tarapore participated in this event with Cyrus Cama at his third Olympics in Barcelona in 1992. Manav Shroff and Sumit Patel participated in the 49 ER class skiffs at the 2004 Athens Olympics.