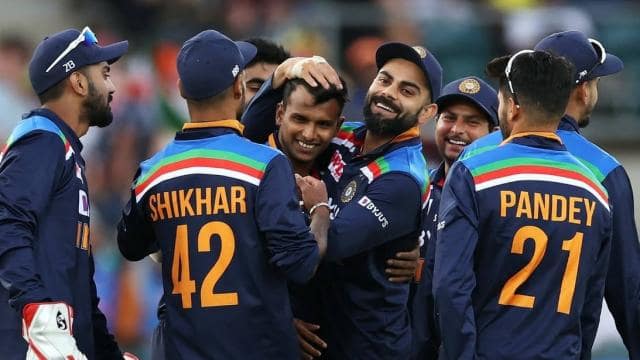 For Team India pacer T Natarajan, the tour of Australia has been nothing short of a golden dream. He was selected as a net bowler, followed by an injury to Varun Chakraborty, after which he was included in the T20 International team.

He became part of the ODI international team as a backup to Navdeep Saini and then got a chance to make his debut in the Test series as well. Natarajan became the first Indian cricketer to debut in all three formats on a tour.

During this, he got an opportunity to play in the limited overs series under the captaincy of Virat Kohli and Ajinkya Rahane in the Test series. T Natarajan has spoken about the captaincy of both.

Natarajan also said that he enjoyed playing under the captaincy of Virat Kohli and Ajinkya Rahane as he boosted and supported a lot of morale. He said, ‘Virat Kohli and Ajinkya Rahane handled me well. They inspired me to do a lot of positive things elsewhere. I enjoyed playing under the captaincy of both. ‘ Natarajan, who went to Australia as a net bowler, said he did not expect to get a chance, which made him under pressure while playing the first match for India.

The 29-year-old made his India debut in the third ODI in Canberra on 2 December. Natarajan said, ‘I was committed to do my job. I did not expect to get a chance in ODIs. I was under pressure when I was told that I would play in it. I wanted to take advantage of the opportunity.

Playing and taking a wicket was like a dream. The left-arm pacer made his Test debut in the fourth and final match at the Gabba in which India won the historic series against Australia. Natarajan took three wickets in this match. He said that representing the country was a dream come true.

Natarajan said, ‘After playing for India, I cannot express my happiness in words. It was like a dream. I also got a lot of support from coaches and players. He supported me and encouraged me greatly. I was able to do well because of his support. ‘ Natarajan has so far won three Tests, two T20Is and 6 ODIs.