You must have seen Virat Kohli hitting sixes and fours in the field, but did you know that Virat also has a hidden talent, which he offered for his love i.e. Anushka Sharma.

Mumbai. Bollywood actress Anushka Sharma and Indian cricket team captain Virat Kohli are the couple whose fans are not only Bollywood lovers but also cricket lovers. Celebs’ love goals woo their fans. People are desperate to know about the love story of both. You must have seen Virat hitting many sixes and fours in the field, but do you know that Virat also has a hidden talent, which he offered for his love i.e. Anushka. Virat Kohli, one of the stalwarts of the cricket world, is known for his aggressive approach to the field. Virat Kohli is not only very romantic but he also sings songs for Anushka Sharma. These days, a video of Virat Kohli and Anushka Sharma’s wedding is going viral, in which Virat is singing the song ‘Mere Mehboob Qayamat Hogi’ for Anushka. 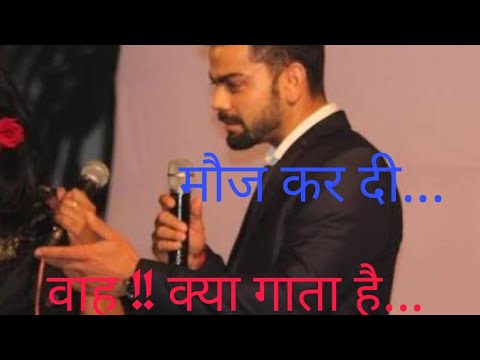 This throwback video is becoming increasingly viral on social media, which fans are constantly liking. The video is during a wedding party, in which Virat Kohli sang a song for Anushka. Anushka is also looking emotional in the video. As soon as Virat completes his song, the echo of applause starts to be heard in the party. This old video is now becoming increasingly viral on social media. Let us tell you that in 2017, both of them got married in Italy. Recently, both of them have become mummy-dads for the first time, little fairies have come to their house, which is named Vamika. Both have not yet brought their daughter’s face to the media. Both want to keep their baby girl in the limelight. For this, he also appealed to the paparazzi.