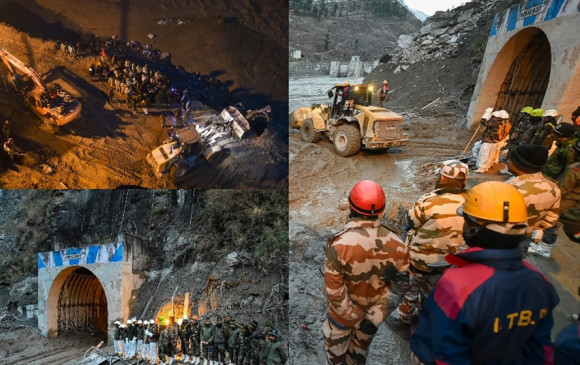 Digital Desk, New Delhi. Today is the fifth day of the accident at Tapovan in Chamoli. Efforts are on to rescue 39 workers trapped in NTPC tunnel. According to Chamoli district administration, till 10 pm, 36 bodies have been recovered from the area, while 170 people are still missing. At the same time, 15 human organs were recovered, whose DNA samples have been kept safe. Heavy machinery and man power were transported to Chamoli for rescue from the Chinook chopper of the army on Thursday. 14 passengers and 1400 kg load for NDRF and SDRF, 5 officers of Border Road Organization (BRO) and 3 tons of goods have been transported here.

Preserve DNA samples of 15 human organs
Police, SDRF and SSB personnel are continuously engaged in riverbank operations. Three more bodies were found on Thursday. Two bodies were found near the Alaknanda shore, Gallaun and one near Jilasu. Tehsildar Sohan Singh Rangad said that on receipt of the dead body, the administration team has left for the spot. This corpse is feared to be missing in the disaster. At the same time, four bodies and seven human organs were cremated. Tehsildar Sohan Singh Rangad said that after the February 7 disaster, a total of five bodies were found at different places along the Alaknanda River, one of which was identified. The remaining four bodies and seven human organs have not been identified. After taking his DNA sample safe, the police-administration and the municipality cremated him on the banks of the Alaknanda River at Karnprayag Ghat.

Expect to meet people around 80 meters
DIG Garhwal Neeru Garg said that all are trying that we can reach beyond the front. Earlier the speed was good, but now the liquid has become more, the more we are cleaning, the more liquid is coming out from inside. Efforts are on, hoping to get those people around 180 meters.

Relief rescue work halted for about half an hour
At the same time, ITBP has said that the rescue operation in the tunnel has been temporarily halted due to increase in the river’s water level. So far there is nothing alarming in the flow of the river. After the rise in the water level of the Rishiganga river, the relief work which stopped for about half an hour now started. NDRF personnel say the water level is rising, so the teams were shifted to safer places. The operation has been resumed with limited teams.

The plan was to first clear the debris and reach inside.
The length of this tunnel is about two and a half kilometers. Most of it is riddled with debris. The teams of Army, ITBP, NDRF and SDRF were trying to reach the tunnel directly by Wednesday. Debris was cleaned up to 120 meters inside. However, drilling was considered if difficulties appeared.

Video of disaster viral on social media
A video of the February 7 disaster in Chamoli is going viral on social media. It is clear that after the rise in the water level, the rivers have destroyed everything falling in the way. In this video, some workers were seen trying to escape from the water and debris at the dam built here, but they could not escape.