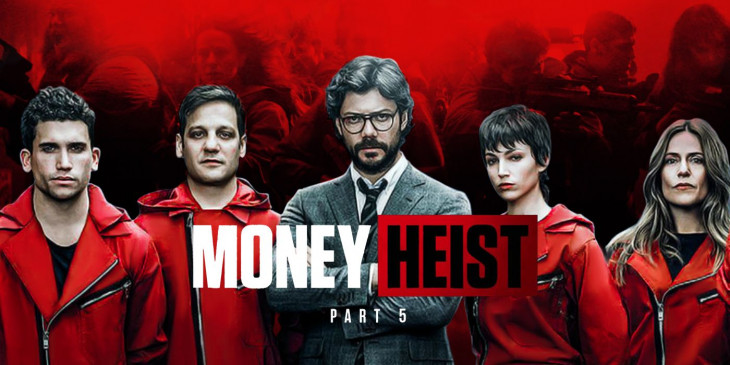 The last season of ‘Money Heist’ will be released on this date, Netflix announces

Digital Desk, Mumbai. More people have become fond of web series than films. This is the reason, viewers now eagerly wait for their favorite web series and they like to watch every season on its release date. Fan followings of Netflix’s Spanish crime web series “Money Heist” are worldwide. This series is also streamed in Hindi, due to which there is a large number of fans of this show in India as well. Not only the general audience but many Bollywood stars are also fans of this series. Although fans are very excited about each season, but there is a lot of uncertainty about its fifth season, as this is the last season of this series. Fans are desperate to know what happened to the professor and his gang within this series? So let me tell you, your wait is over now, because Netflix has announced the release date of its last season.

The last season will be released in two parts

Actually, its last season will be released in two parts. The fifth and final season will be released in 2 parts. The platforms have announced dates for both. Netflix shared the teaser of the series on its social media account and wrote, shout Bella. The last part of the Money Heist is coming this year. Volume 1 will arrive on September 3 and Volume 2 on December 3. At the same time, you can see in this teaser that, in Bank of Spain, the police have surrounded the professor’s gang and there is firing from all around. The last season will see the end of the Professor’s gang, which Robbery continues to do. This season, Alvaro Morte is returning as Master Mind Professor once again. His bonfire Ursula Korbero, Itziar Ituno, Miguel Herran, Jaime Lorente, Esther Acebo, Darko Peric and Enrique Ears have also returned for season 5.

After the story of this web series, a clever professor has formed his gang and they execute the dangerous plan to rob the bank of Spain. The professor is going to be successful in this Robbery to a great extent. In all four seasons so far, it has been shown that the mastermind professor along with his team of vicious thieves carry out the robbery incident in the bank, but now it will be very interesting to see how this robbery will end. So wait a little and then the curtain will rise from the story. However, the mask and the song ‘Bela Chao’ used in it, along with the best story of each season, is quite popular among the fans. All parts of this Spanish-language series are also available in English on Netflix. The first web series ‘Money Heist’ was first shown on Spanish TV. Then this series was flopped. The Makers had even decided to discontinue it after the second season. Netflix then bought the show and was a huge success.

You can bank on it to be explosive # MoneyHeist5@lacasadepapelpic.twitter.com/TjxsX7DL8y