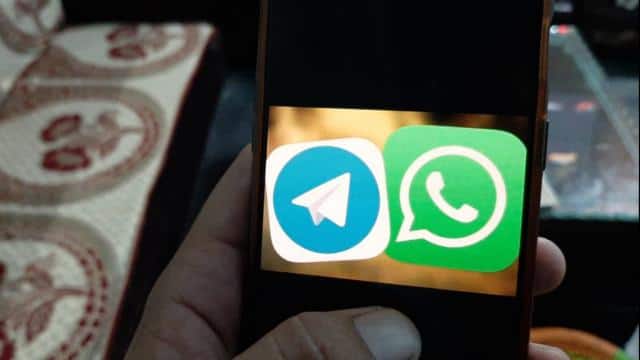 Telegram and Whatsapp clashed on Twitter, counting each other’s flaws

The popular messaging app Whatsapp is very much in discussion these days. WhatsApp gave its users time to accept the new policy by May 15. Those who do not accept them will not be able to chat on WhatsApp. Users all over the world are opposing this decision of WhatsApp. Meanwhile, the verbal war between Telegram and Whatsapp on micro-blogging site Twitter has also started. So let’s know what Telegram said to WhatsApp and what WhatsApp has responded in return.

Know the whole matter here
In fact, Telegram Messenger posted a post on its Twitter account a day ago (May 14). This post depicts the different form of Recycle bin (or say Dustbin) from 1995 to 2021. In this picture, the year 2021 recycling bin has a WhatsApp logo and Facebook is inserted inside. This shows how users have boycotted Facebook and WhatsApp this year.

Whatsapp also reposted
Seeing this post, whatsapp was also going to be silent. He also sent a telegram to this post through a meme. WhatsApp put a picture and wrote, ‘Telegram admin: “… and what people don’t know is we’re not end-to-end encrypted by default’ We are not encrypted end to end.)

.@WhatsApp Our users know how things work, and have the open source apps to PROVE it. You … talk to the screenshot 🤚 it says you’re lying. pic.twitter.com/aSUotBGWh0

Also read: WhatsApp Trick: Ignore can be repaired even after reading the message, the sender will not know

Actually the user argued that WhatsApp chat is not completely secure. Backing up to iCould gives Apple access to the chat. Similarly, by giving backup on Google Drive, Google gets access to it. The user also claimed that since the old chat is retrieved as soon as it is logged on the new device, that is, Whatsapp also has access to the chat.