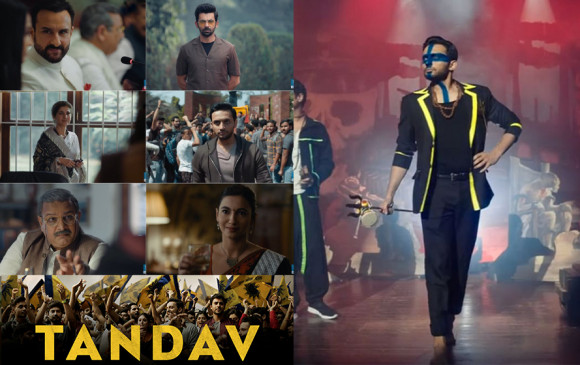 Tandav review: Preparation of Boycott by linking to religion, director is Abbas, then users are declaring anti-Hindu propaganda

Digital Desk (Bhopal). 2021’s much talked webseries ‘Tandava’ has been released on 15 January. It is in dispute with the release. Actually, the director of this webseries is named Ali Abbas Zafar. Now the director is Muslim and if the characters in the film will be disguised as Lord Shiva and comment on Ram, then there will be uproar. This webseries is in nine parts. This is purely a political drama webseries, in which aspiring leaders can be seen doing politics for a chair. This is the story of a party which has been in power since the last ‘two terms’ and the most important door of this party is with a woman, who is behind the chair and keeping an eye on everyone, because she believes that the throne By staying back they can see the enemy most clearly.

Adorned with many stars like Saifali Khan, Dimple Kapadia and Sunil Grover, Zeeshan Ayub and Gauhar Khan, the film has managed to keep the audience in suspense till the end. It has also tried to tell the life and thinking of the youth leaders. Zeeshan Job has done a very good job as a university student.

With the release, the film is in controversy and social media has been running a voice-over Tandava hashtag. Users say that the Hindu gods have been insulted in the very first part of the series. In the first episode of the web series Zeeshan Ayub is seen disguised as Lord Shiva and addresses the students of the university. As soon as they come to the stage, a stage operator says, ‘Narayan-Narayan. God do something. Ramji’s followers are constantly increasing on social media. I think we should also make some new strategies. On this, Zeeshan Ayub, who is seen as Shiva, says, “What should I do to change the picture?” On this, the stage operator says that you are very innocent. After this, Job says that from whom do you want freedom. To this, students reply that freedom from casteism. Freedom to speak, so Job says that does not mean freedom from the country, freedom is needed while in the country.

All these things have been made by the users and it is written that ‘Ali Abbas is the director of the Tandava web series and is fully involved in advancing the left wing agenda. He is glorifying the gang in pieces. ‘

It is worth noting that director Ali Abbas Zafar has previously directed films like ‘Tiger Zinda Hai’ and ‘Sultan’ which have been box office hits.