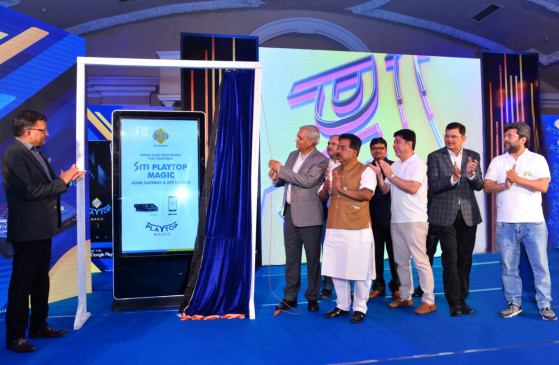 Digital Desk, New Delhi. City Platop Magic, the Android TV Certified 4K HDR set-top box, can make any type of TV smart for customers, allowing them to use their city digital cable TV as well as all Android TVs using a single remote on their existing TVs Will be able to use the facilities of Customers will be able to access Google’s Android TV Play Store to download apps and games of their choice.

Its smart remote will be able to control both the City Platop Magic STB and the customer’s TV, with a built-in Google accessory and its sound is also of superior quality. Press and hold the microphone on its remote for a few seconds and ask what you want to see. Due to the presence of Chromecast built-in facility, customers will also be able to operate their TV screens from their mobile phones / tablets using the City Platop Magic STB.

STB will make it convenient for customers to use Googles Duo-based video calling with their loved ones by allowing them to use their TVs. It is the next generation Android TV set-top box, launched by City Network. It will also work with Google Home and develop the home automation feature.

What customers like to see in one place, they find it easily. One of the unique features of the City Platop Magic STB is that it can easily work with any ISP or even a mobile hotspot. Customers just have to make sure that their mobile connection is 4G, after which they will be able to easily watch their favorite OTT shows and also play games on the TV screen.

Which gets a exclusive subscription to a number of OTT apps such as Hungama Play, Shemaroo Mee and Ada Times among the handful of customers. The app will instantly bring customers their favorite entertainment and selected live channels, even if they are not in front of their TV. Like cable TV, this app can be recharged through the company’s online website or through its existing local cable operators to get the facility.

We are very excited to bring our Next Generation City Platop Magic Android TV Set Top Box and IOS / Android Apps to our customers. Citi has been at the forefront of making its customers happy and satisfied with the latest technology. The launch of City Platop is another step, we are committed to bringing Superior Entertainment Experience to our customers. The box will make any TV smart, with the ultimate view and DVR feature of City HD digital cable television.

The City Platop Magic set-top box will be available in multiple stages for City Network Limited. With an immediate launch in the eastern states of India, who want to upgrade to a Superior Entertainment Experience. The City Platop Magic App is available for mobile and tablet phones across India on the Apple App Store and Android Play Store. To login to the app, Citi customers must put together their Citi virtual card number and mobile number via OTP.