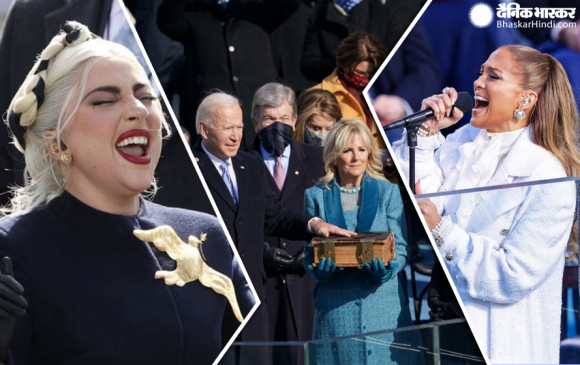 Washington: Hollywood’s famous singer-actress Jennifer Lopez tied her powerful performance at the swearing-in ceremony of US President Joe Biden at the US Capitol. According to The Hollywood Reporter, singer Jennifer sang a mashup of the songs ‘If You Had My Love,’ ‘This Land Your Land’ and ‘America the Beautiful’. Lopez gave his brilliant performance after the swearing in of US Vice President Kamala Harris.

Lopez wore a golden belt to give her dress a flamboyant look and she was decked out in a long white over-coat. The 51-year-old singer chose to tie her hair in a high ponytail and wore earrings and pearl bracelets in one of her earrings. Jennifer had put herself in a white outfit from head to toe on such a big occasion. Singer was seen with a wide leg trouser, maxi jacket and matching hat, the mask he was wearing was also white.


Lopez said in Spanish “One Nation, Freedom and Justice for All, then shocked everyone with her song ‘Let’s Get Loud’. In addition to Jennifer, musician Lady Gaga also performed at the opening ceremony. ‘A Star Is The Bourne ‘singer gave a powerful rendition of the American national anthem at the event.