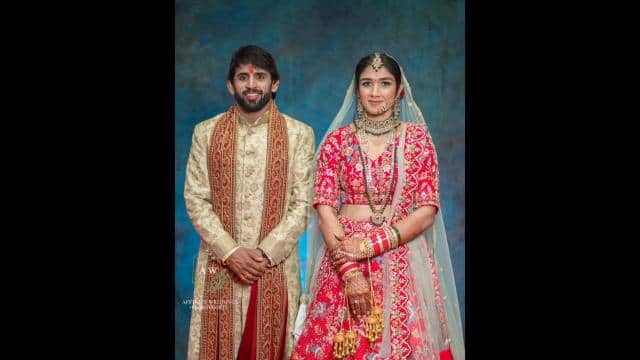 
Sangeeta Phogat, the younger daughter of Dronacharya Award winner Mahavir Phogat, is married to wrestler Bajrang Punia. Bajrang Poonia also wrote a special message on social media sharing the wedding photos with Sangeeta. Due to Corona virus, the wedding was done in a very simple manner and the number of guests was also limited. Sangeeta, like her sisters, took eight rounds instead of seven in marriage.

Sangeeta Phogat, like her elder sisters Babita and Geeta Phogat, took eight rounds in their marriage instead of seven. Sangeeta took this eighth round as a bachao-beti padhao and daughter-in-feed, carrying on the tradition followed by her sisters. Bajrang Punia shared the photo with Sangeet Phogat after the wedding, writing, ‘Marriage is a wonderful ceremony. Today I have chosen my life partner and brought her from her home to her house. Still feeling like I have got another family. I am going to start this new chapter of life. Happy and a little bit restless too. Now it’s time to face this test guys. Thank you for your affection and blessings. ‘