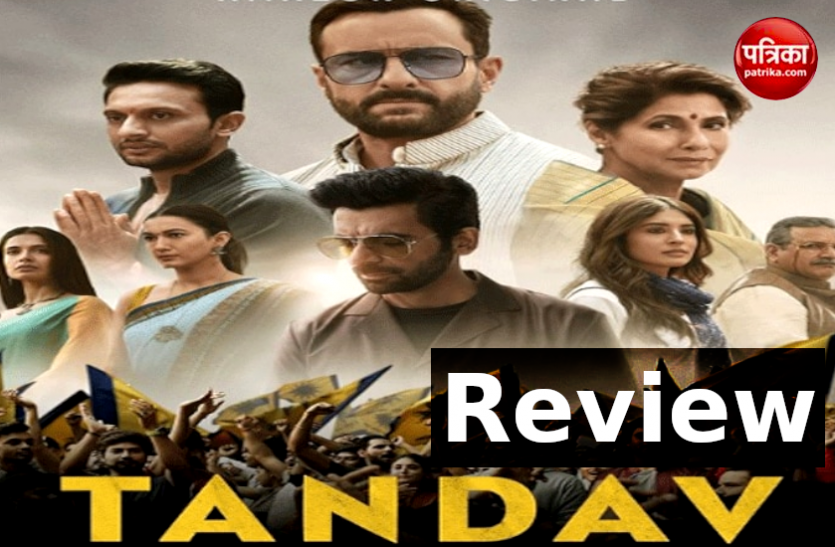 -Dinesh Thakur
Presenting reality with rational events is the first condition of any good political drama. This gives the drama the power to create something. Such a thing, which goes out, goes far. In such a drama, when too many artificial incidents are declared, then no matter is made, nor the motives and intentions of those who make it are revealed. This is the biggest weakness of Ali Abbas Zafar’s political web series ‘Tandav Web Series’. Instead of an easy investigation into the events that have made headlines during the last two-three years, they have made them more ‘loud’. The story is so fabricated that the web series has become like a fantasy film. This is the biggest weakness of a political drama that it keeps revolving around hypothetical events, cut from reality.

ALSO READ: This Indian actress took a bath in a tub filled with ice in a bitter winter, counted its benefits

Dramatics dominate themes
Ali Abbas Zafar has been making spicy films like ‘Sultan’, ‘Tiger Zinda Hai’ and ‘Bharat’. He has also tried to make ‘Tandava’ very spicy. This series, which is about five hours long, entertains a lot of spectacle lovers, who believe in ‘Just creating a ruckus, not my motive’, they get nothing from this so-called political drama with excessive noise. In the series, the corruption of the farmers movement, student movement as well as the politics of politics, government hospitals and police departments were made very dramatic. At the beginning of the series, when a lustful middleman (Sunil Grover) says – ‘What comes between right and wrong is called politics’, then it becomes clear what glasses the politics which makes ‘Tandava’ See from

Politics of bloodshed and conspiracy
Tingmanshu has become the Prime Minister in the Dhulia series, who has been in this chair for three terms and after the election, is assuming his victory again. Due to gestures, tricks and talking style, he seems more of a legislator than a Prime Minister. His son Saif Ali Khan is also dreaming of becoming Prime Minister. Tingmashu feels that if the son becomes Prime Minister, the period of dictatorship will begin, because he believes in crushing opponents. Saif Ali goes four steps ahead and does all the work of Tingmanshu. His party leader Dimple Kapadia (he had a ‘special relationship’ with the Prime Minister) gets a glimpse of this murder. To keep his mouth shut, Saif Ali has to make him the Prime Minister. Further, Saif is busy in these tricks how to remove Dimple and get the Prime Minister’s chair.

Beyond the grasp of so many gray characters
Parallel to this gimmicky story, the bloodshed incidents of students of VNU (Vivekananda National University) on the lines of JNU also revolve. Here Mohammad Zeeshan Ayub’s character is like Kanhaiya Kumar, a student of JNU. All the characters in ‘Tandava’, except this character, are seen to be stripped of morality, honesty and truth. A professor (Sandhya Mridul) is living with an already married minister (Anoop Soni), leaving her professor husband (Dino Morea). Professor Husband is having an affair with a student (Kritika Kamra). Saif Ali is trying to give the old girlfriend (Sarah Jane Dias) a new defense to the old love by making her the Minister of Defense. Do not understand what Ali Abbas wants to prove by showing so many gray characters in the story.

Dimple and Sunil Grover acting well
Dimple Kapadia’s effortless performance gives some relief in ‘Tandava’. His gesture and style of speaking in the role of a sly and tricky leader is quite different from his film characters till now. Similarly Sunil Grover, who is a prankster on TV, is also shocked by the role of a lustful middleman. He can do good villains in films. Most of the other actors did not do anything that they had not done on screen before.

Scripting does not give rhythm to the events
The story of ‘Tandava’ revolving at many levels also does not tie up because the script and direction do not give a definite rhythm to the events. The college scene is shown in one scene, then in the next scene, the camera reaches the residence like Saif Ali’s palace. Sometimes, while walking around the police station, suddenly, a couple engaged in love starts hovering over a couple. Since the series is designed for OTT platforms, there is a glut of abuse from beginning to end. Female characters also keep abusing abuses.