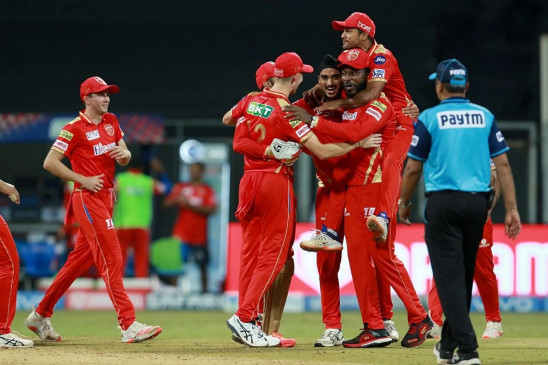 RR vs PK IPL 2021: Sanju Samson as the first IPL player to score a century in the first match, Punjab defeated Rajasthan by 4 runs

Digital Desk, Mumbai. Punjab Kings defeated Rajasthan Royals by 4 runs in the fifth match of IPL 2021. Batting first after losing the toss, the Punjab team scored 221 runs after losing 6 wickets in 20 overs. In response, the Rajasthan team could only score 217 runs for 7 wickets in 20 overs. As captain, Samson scored a century in his very first match. He became the first player of the IPL to do so. It was Samson’s third century in the IPL. He also equaled AB de Villiers in terms of century.

However, Samson’s century went in vain. In the last over, Rajasthan needed 13 runs to win. For Punjab, Arshdeep Singh bowled in the 20th over. Only 2 runs came off the first 3 balls. After that Samson hit a six on the fourth ball. No run scored on the fifth ball. On the final ball, Rajasthan needed 5 runs to win. Samson shot, but she went into the hands of Deepak Hooda standing on the boundary line. Samson was dismissed for 119 off 63 balls.

Lokesh Rahul breaks Shane Watson’s record
Captain Lokesh Rahul made his 22nd FIFTY in IPL. He scored 91 runs off 50 balls. Chetan Sakaria gets Rahul caught by Rahul Tewatia. Tewatia took a brilliant catch at the boundary. Rahul overtook former Australian all-rounder Shane Watson in most fifties. Watson scored 3874 runs in 145 matches with 21 fifties. He retired from the IPL only after the last season.

Rajasthan Royals dropped 3 catches in the match
Leg-spinner Shreyas Gopal was bowling in the 7th over of the Punjab innings. Rahul played a long shot on the third ball of the over. Stokes, fielding at the boundary, gave up his catch. The ball missed Stokes’ hand and went across the boundary. At this time Rahul was batting for 15 runs.

After this, in the 9th over, Rahul Tevatia gave up Gayle’s catch on his own ball. At this time Gayle was batting for 33 runs. Deepak fired a high shot over Mustafizur’s ball in the 15th over. Jose Butler and Ben Stokes could not judge it and the ball fell between the two.