New Delhi. The Reserve Bank of India (RBI) has taken stringent steps by taking supervisory action against MasterCard Asia/Pacific Limited on Wednesday. RBI has restricted MasterCard from adding new domestic customers to its card network (credit, debit or prepaid) with effect from July 22, 2021.

The central bank has asked MasterCard to inform all card issuing banks and non-bank entities about this order. The central bank has taken this supervisory action against MasterCard under Section 17 of the Payment and Settlement Systems Act, 2007. MasterCard has been approved as a payment system operator under the PSS Act to operate the Carw network in the country. 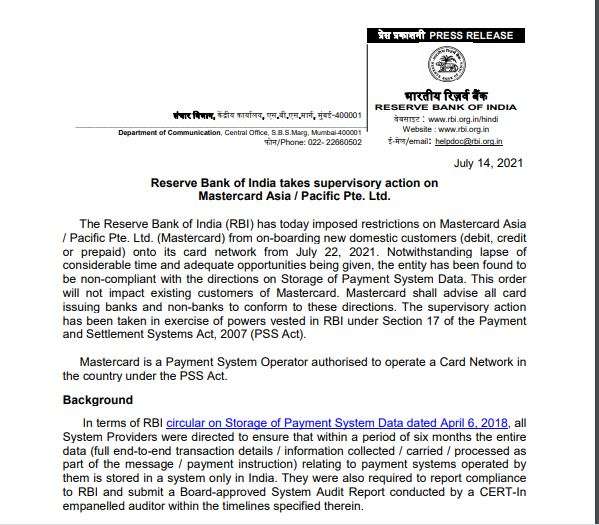 RBI in a circular dated 6th April, 2018 had said that all system providers should have complete data (full end-to-end transaction details/ information collected/ payment instructions) relating to the payment systems operated by them within a period of six months. Has to be stored in systems located in India. They will have to submit its compliance report to RBI and also submit a board-approved system audit report by an auditor empaneled at CERT-In.

this Too Read: Modi government gave a gift to central employees, will get this much salary in August

this Too Read: Bad news for Google users, the company stopped this service

this Too Read: Even China’s friendship could not save this neighboring country of India, the clouds of crisis are hovering over the economy