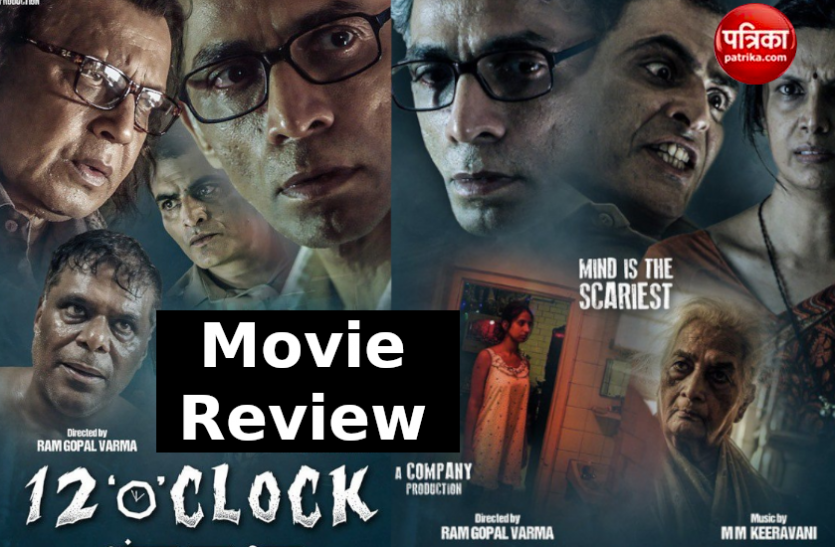 Long before the outbreak of Corona, ‘social distancing’ was being followed by Ram Gopal Varman’s films. People lived many yards away from the theaters where their films were screened. In the last few years, he made such childish and clumsy films that no section showed interest in him. Surprisingly, the filmmaker who produced ‘Satya’ and ‘Shool’ started to produce films whose head and legs are incomprehensible in ‘Factory’ (this is the name of Ram Gopal Varma’s company). His new film ’12 O Clock’ (12 ‘O’ Clock Movie) is also a spectacle of horror in the name of horror. There is nothing in it that has not been seen on screen before. The story is very whispering. In the script, the balls are the balls. The leftovers of Ram Gopal Varma, which had left no stone unturned, were completed.

Story wrapped in superstition
In the beginning of this film, wrapped in superstition, a girl named Gauri (Krishna Gautam) suddenly rises from bed and starts moving around. His parents, grandmother and brother are snoring. She wanders from this room to that room awkwardly, rolling her eyes, making her mouth. Background music was used to create horror. Even then the horror is not born. It is further revealed that the spirit of a serial killer has captured the girl’s body. Apparently, there will now be a Tantrik (Ashish Vidyarthi) entry. A psychiatrist (Mithun Chakraborty) will be sheltered. The doctor (Ali Asgar) will be shown. When they raise their hands, the girl’s father (Makarand Deshpande) arrives at the police station to inform that his daughter is committing the killings in the city. Needless to say that the police station in-charge is the same encounter specialist who eliminated the serial killer two years ago. Even before the story was going round and round. In the same way, he goes to the revolving climax and piles up.

Mithun and Manav came after half the film
In this lifeless story, he has done as much acting as he could with all the actors. Mithun Chakraborty and Manav Kaul’s entry is followed by half the film. Till then, the acting front is handled by Makrand Deshpande, Krishna Gautam and Ali Asgar. Later, Mithun and Manav also get involved in breaking the record of over-acting. Goya was competing among all who could fail more. What the parents did in this film to liberate the daughter from the spirit of serial killer, hardly anyone in the world would have done. Which means that nothing happened in ’12 o clock ‘.

Weak on technology front too
From the technical point of view, ’12 O Clock’ is a very weak film. The camera moves around awkwardly throughout the film. Sometimes on its face, sometimes on its face, sometimes on the wall or sometimes directly on the road. There is no reason why what is happening on screen is why and for whom. Abusive words are used indiscriminately. Ram Gopal Varma also had a bit of knowledge that the story has no power. Therefore, they have tried to create horror by changing the camera angle and through hoarse background. But it did not work. Instead of horror, this ‘Horribal’ (horrid) became a boring film. However, this is not the first such experience for Verma. His ‘Funk’ and ‘Vastu Shastra’ were also boring films. ’12 o Clock’ is four steps ahead of them.