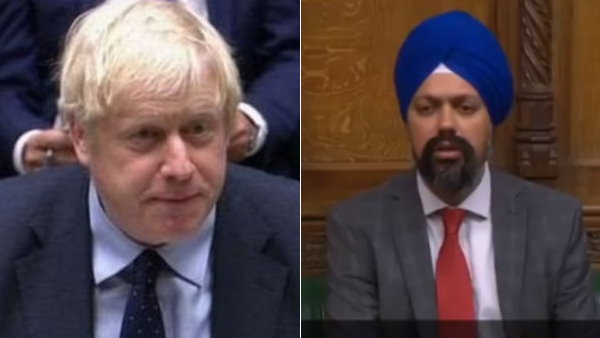 PM Boris Johnson could not understand the issue of farmer movement in UK Parliament, started talking about Indo-Pak

new Delhi. Labor Party MP Tanmanjit Singh Dhesi in Britain raised the issue of India’s peasant movement in Parliament with Prime Minister Boris Johnson on Wednesday. Dhesi told Boris Johnson that he should raise the concerns we have with the Prime Minister of India about the kind of treatment that has been done to farmers.

A strange situation arose in the British Parliament when Boris Johnson did not understand the case and while replying to the MP he said that he was worried about what is happening between Indbia and Pakistan. Listening to Johnson’s answer, MP Tanmanjit Singh was also seen making a surprise.

On Wednesday, Sikh MP Tanmanjit Singh Dhesi of the British opposition Labor Party told the British Prime Minisbter Boris Johnson on the farmers’ agitation that water canon, tear gas and police force have been used for peaceful demonstrations of farmers in India.

The pictures that have come out are painful. Everyone has the fundamental right to hold peaceful protests. In such a situation, we should all be worried about what is happening. I want to ask you (Boris Johnson) that you convey our concerns to the Indian Prime Minister.

On the question of Tanmanjit Singh Dhesi, Prime Minister Boris Johnson stood up and said, “Our view is that whatever is happening between India and Pakistan, we have serious concerns about it, but it is a matter of those two governments.” Seeing Boris Johnson as the case of India Pakistan, the farmer movement, MP Tanmanjeet was also shocked.

Tanmanjeet Singh Dhesi has also shared this on his Twitter. Let us tell you that the name of Tanmanjit Singh Dhesi alias Tan Dhesi, who became the youngest Sikh mayor of the city of Gravesham in England, also has the record of becoming the first Sikh MP in the UK House of Commons.

He is counted among the fiercest MPs. Born in Raipur village in Jalandhar, Tanmanjit Singh has studied at Oxford and Cambridge International University after attending school from Jalandhar.