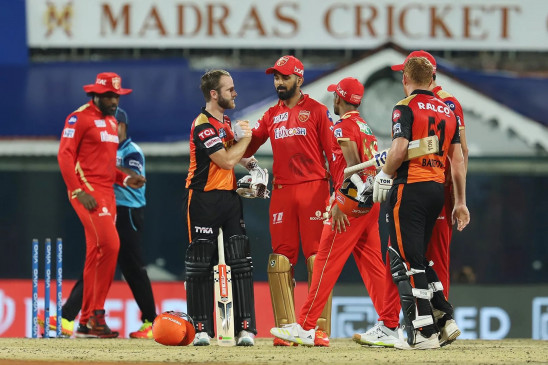 Digital Desk, Chennai. Sunrisers Hyderabad defeated Punjab Kings by 9 wickets in the first match of the second double header of the IPL 2021 season. Batting first after winning the toss at Chepak Stadium, Chennai, Punjab were all out by scoring 120 runs in 19.4 overs. In response, Hyderabad won the match by scoring 121 runs for 1 wicket in 18.4 overs. Johnny Bairstow was 63 not out and Kane Williamson was 16 not out.

This is Hyderabad’s first win this season. Earlier, the team had to face defeat in 3 matches. This is the SRH team’s 10th win over PBKS in the last 13 matches. With this win, SRH reached number 7 in the points table. At the same time, PBKS is at number 8. Bairstow placed 7th FIFTY in IPL. This is his second fifty this season. Earlier, Bairstow had scored 55 runs in the first match of the season against KKR.

However, Bairstow made the 7th FIFT in the IPL after that. This was his second fifty this season. Earlier, Bairstow had scored 55 runs in the first match of the season against KKR. Bairstow made an unbeaten partnership of 48 off 52 balls for the second wicket with Williamson to win the team.

Nothing has gone so far in IPL for PBKS and SRH. Sunrisers Hyderabad are at the 8th position in the points table after losing all three matches. At the same time, Punjab’s team is at number 7, winning 1 out of 3 and losing 2.