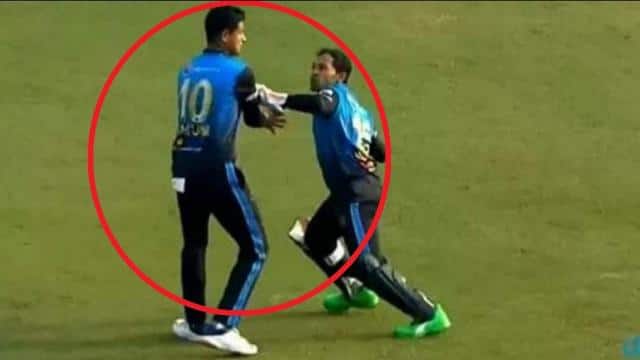 Bangabandhu T20 Cup is being played in Bangladesh, in this tournament all the big cricketers of the country are participating. Four of the top five teams have reached the playoffs after 20 hard matches. Beximco played the Eliminator match between Dhaka and Fortune Barisal on Monday in Dhaka. Beximco Dhaka is headed by Bangladesh’s star wicketkeeper batsman Mushfiqur Rahim. During this match, Mushfiqur got so angry that he stopped slapping his fellow player.

Saha or Pant in the first test, know who can get a place in the playing XI

Beximco Dhaka won, but Mushfiqur Rahim’s anger is being discussed more than his victory. Mushfiqur’s angry video is becoming very viral on social media. The incident occurred in the 17th over of the second innings of the match. Fortune Barisal needed 45 runs off 19 balls with five wickets remaining in the team’s account. Afif Hussain was playing well. A collision between Mushfiqur and Fielder Nasum Ahmed survived in the course of taking the catch. After which Mushfiqur was seen venting his anger on Fielder.

INDvAUS: How do you respond to sledging? Know what Shubman Gill said

There was a time that Mushfiqur would slap him, but he stopped. This was a very important wicket for the team. After this, the remaining players of the team got together to calm Mushfiqur. Watch video-

Calm down, Rahim. Literally. What a chotu 🐯🔥