Mrunal Thakur came in the grip of Corona, shared the information by sharing the post

“I have mild symptoms of covid, but I am feeling fine and have isolated myself. I am following the protocol given by my doctor and health professionals.” 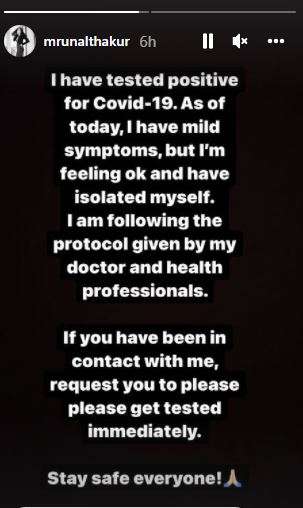 “If you have come in contact with me, you are requested to kindly get the test done immediately. Stay safe everyone.”

Mrunal is currently awaiting the release of her next film ‘Jersey’ which is a sports drama starring Shahid Kapoor.

The film’s release date has been postponed after civil restrictions were re-imposed due to fears over the Omicron variant.

Releasing on December 31, the film tells the story of a middle-aged cricketer, who returns to the sport to fulfill his son’s wish.

Directed by Gowtham Tinnanuri, it is a remake of the 2019 Telugu film of the same name.

Malaika Arora welcomed the new year with a bang, what will you say after watching the video!

What did the shy Ranbir Kapoor do in the gathering, called Alia a ‘cracker’