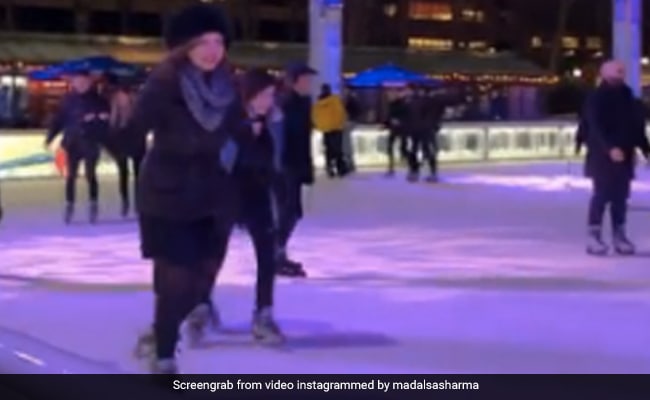 Madalsa Sharma, daughter-in-law of Bollywood’s famous actor Mithun Chakraborty, is dominated on social media these days. Madalsa Sharma has won everyone’s heart with her acting in Star Plus’s Anupama serial, as well as she is often in the discussion about her style. Recently a video of Madalsa Sharma is becoming quite viral. The actress has shared this video on the occasion of Christmas, in which she is seen doing ice skating. Not only this, Madalasa’s cute style is being liked by people so much in this video, due to which this video has been seen more than 11 thousand times so far.

Sharing this video, Madalsa Sharam wrote in the caption – Merry Christmas to all of you. May this Christmas bring lots of love, happiness and joy to your life. Always be happy In this video, Madalsa is seen in black outfits and is ice skating in a bold style. Let us tell you that Madalsa often keeps sharing her beautiful photos and videos with fans, which are viral on social media.

Significantly, Madalsa Sharma these days is seen playing the lead role in the serial ‘Anupma’ coming on Star Plus. She is seen playing the character of ‘Kavya’ in the serial Anupama. Even as a villain, Madalsa Sharma leaves no chance of winning the hearts of the people. Madalsa Sharma is the daughter of actress Sheela Sharma and producer and director Subhash Sharma. He made his debut in the acting world in 2009 with the Telugu film ‘Fitting’. Apart from this, he also worked in the Kannada film ‘Shaurya’.