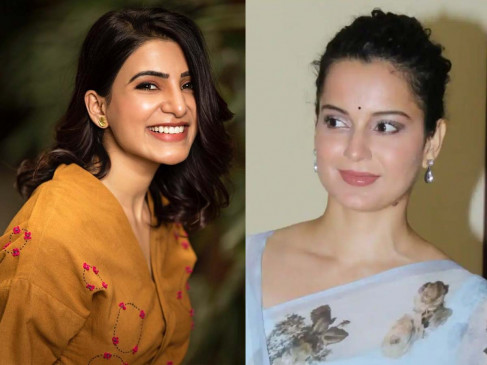 Kangana Ranaut, who was crazy about this actress in ‘The Family Man 2’, said – the girl won the heart

Digital Desk, Mumbai. Bollywood actress Kangana Ranaut has reacted on Instagram after watching the trailer of Manoj Bajpayee starrer ‘The Family Man 2’. Kangana liked South Actress Samantha Akkineni’s acting in this web series and has praised Samantha very strongly. Let me tell you, the trailer of ‘The Family Man 2’ has been released on May 19 and people are very fond of it. Kangana, while sharing a post on her Insta story, wrote to Samantha that, the girl has won the heart.

Kangana shared a photo of Samantha’s character in the trailer of this web series, writing, “This girl has won my heart.” Samantha has also commented on Kangna’s praise, thanking her. At the same time, Naga Chaitanya has also praised the trailer by impressing with his wife’s brilliant acting. Sharing a post, Naga wrote that, “Love it -10 / 10.” …. The matter did not end here but Samantha commented on it and asked her husband a funny question. The actress wrote that, “This rating is for the trailer or for me.” After the trailer was released, on Wednesday, Samantha shared the trailer, writing, “Hopefully you will like it. The trailer of ‘The Family Man 2’ has been released.” And there is no doubt that, the trailer fans of the series are very much liked and they are also praising it fiercely.

In the trailer of this brilliant action-drama web series by Manoj Bajpayee, both Manoj Bajpayee and Samantha are seen doing action. Like season-1, Manoj is playing the character of Srikanth Tiwari in season-2 and he is a detective who cannot even tell his family what they do. The family treats him like an employee working in a common office, but there is no doubt that his profession is always in danger of Manoj’s life and there is no fear on his face at all. After seeing it in the trailer, it is clear that in this season too, Manoj Vajpayee family, office and country are going to be seen performing every responsibility. At the same time, if Samantha plays the role of Akkineni, in this series, Samantha is appearing in the important role of a female extremist Raji. The trailer also features a confrontation between Detective Manoj and terrorist Samantha. The special thing is that, Samantha is also making her digital debut with this series.

The makers announced the release date of the web series along with the release of the trailer. Though it was to be released earlier, the makers of OTT platform Amazon Prime Video’s web series ‘Tandava’ had a moratorium on the release of the series. But after 4 months, giving the good news to the fans, the makers announced that ‘The Family Man 2’ will be released on June 4 this year. Producer-director Raj Nidimoru and Krishna D.K. Apart from Manoj and Samantha, Seema Biswas, Sunny Hinduja, Darshan Kumar, Shreya Dhanwantari, Mimme Gupta, Priyamani, Sharib Hashmi and N Alagampherumal will also be seen in the lead roles.