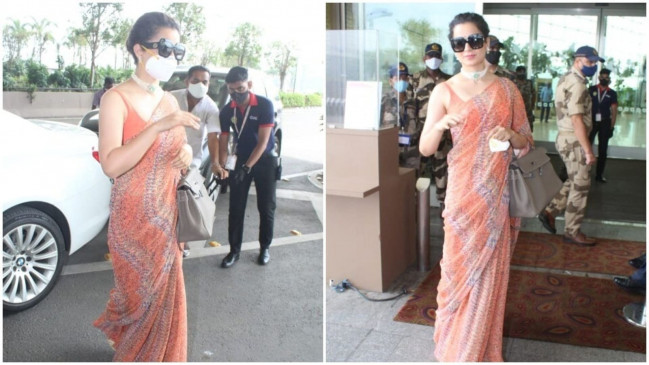 Kangana Ranaut leaves for Manali after Kovid is negative, asked paparazzi these questions

Digital Desk, Mumbai. Bollywood actress Kangana Ranaut’s report recently came to Corona negative, after which the actress has left for her hometown Manali. After the report, she was home isolated at her home in Mumbai. But Kangana left for Manali on Friday. Earlier, Paparazzi spotted him at the Mumbai airport and when Paparazzi asked him to pose, Kangana asked everyone, who got the corona and who got the vaccine. A video asking Kangana’s question is becoming increasingly viral on social media, in which she looks very beautiful and fit in an orange sari.

Kangana Ranaut’s Corona report has come positive, she gave information about this on her Instagram account. The actress wrote that, ‘I was feeling tired and weak for the last few days and there was a slight burning sensation in my eyes. Was thinking of going to Himachal so today I got the test done when I came to know that I am corona positive. I’ve quarantined myself. I had no idea that this virus is partying inside my body, now that I have come to know, I will kill it. People, please do not give anyone the strength to win by themselves. If you are scared then it will scare you even more. Let’s end this Coveid-19. This is nothing but a short-term flu that has received a lot of attention and is now scaring people. Everywhere Shiva’

Kangana revealed sometime back that, her report has come negative and now she is recovered from Corona. While sharing this information on social media, he wrote that, “Hello everyone, my corona report has come negative. I want to say a lot about how I beat this virus but I have been told not to offend the fan club of this virus. Yes, it is true that a lot of people get annoyed if something is said about Corona. Thanks and love to all the fans and well-wishers. ”After this post, some trollers asked him for a copy of his report. Upon which Kangana shared her corona report and wrote, ‘These are all those demons who were asking for my report because they see the world as they are themselves. A Ram devotee never lies..Jai Shri Ram…. ‘

Let me tell you, Kangana often kept her views open on all the issues of the country and also made headlines due to conflicting statements, but the actress’s official tweeter account has been suspended a few days ago, after which the actress took to Instagram did. But Kangana believes that she will not be able to last long on social media apps like Instagram.