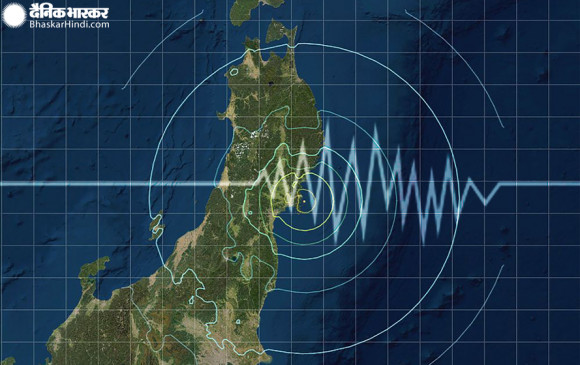 Digital Desk, Tokyo. A 7.2 magnitude earthquake was recorded on the Richter scale in northeastern Japan on Saturday, following which authorities have issued a tsunami warning for Miyagi Prefecture. The earthquake occurred at 6.09 minutes according to local time. The quake’s epicenter was located 60 kilometers below ground at 38.4 degrees north latitude and 141.7 degrees east longitude. According to the earthquake center JMA, it can cause tsunami waves up to one meter high.

1 meter high tsunami warning in Miyagi
The DPA news agency quoted national broadcaster NHK as saying that the Japan Meteorological Agency warned of a 1 meter high tsunami in Miyagi. The warning calls for some residents in Miyagi to arrive at elevated land areas prior to the possible arrival of the tsunami. There are no immediate reports of casualties or property damage. The earthquake also shook buildings in Tokyo.

Gathering information about nuclear plant
Local authorities are collecting information about the condition of the nuclear plant located in the area. According to the American Geological Service, the magnitude of the earthquake has been measured as 7.0. Last year too, there were strong shocks in the same area. Dozens of workers were injured in it. Let us tell you that Japan falls in the areas prone to earthquakes. It is called the Ring of Fire of the Pacific Ocean. It extends from Southeast Asia to the entire Pacific coast region.

Japan was shaken by the tsunami on 11 March 2011
The latest warning of earthquake and tsunami has come at a time when Japan is celebrating the 10th anniversary of the terrible earthquake and tsunami that came ten years ago. On March 11, 2011, there was an earthquake of 9 magnitude. The earthquake resulted in a tsunami and 18,400 people either died or went missing. At the same time the Fukushima plant was destroyed.