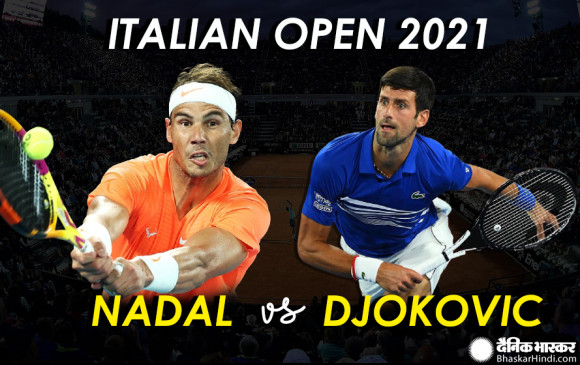 Italian open 2021: Novak Djokovic of Serbia will face Rafael Nadal of Spain in the final

Digital Desk, Rome. World number three tennis star Rafael Nadal of Spain defeated the US number 47 Reilly Opelka 6-4, 6-4 on Saturday to make it to the Italian Open final. In the final, they will face world number-1 player Novak Djokovic of Serbia. Nadal will try to win the title here for the 10th time. He is playing in this tournament for the 12th time and has reached the semi-finals each time.

Djokovic defeated world number-33 Lorenzo Sonego of Italy 6-3, 7-5, 6-2 in the semi-finals held on Saturday. In Rome, nine-time champion Nadal claimed a break in each set and is one win away from equaling the record 36th ATP Masters 1000 title. Nadal is now close to winning a solo tour-level event for the fourth time on 10 or more occasions. He has won 13 Roland Garros titles, 12 Barcelona Trophies and 11 Monte-Carlo titles.

Earlier, Djokovic improved his game after trailing 4-6, 1-2 on Friday and 4-6, 7-5, 7-5 against Stephanos Sitsipas of Greece in a rain-affected quarter-final match on Saturday. Returned from. Djokovic had to struggle a lot in the semi-finals as well.

After losing the first set to Asani, they lost in the tiebreaker in the second set but Djokovic kept his composure and did not give any chance to Sonego in the decisive set. This will be the sixth final in Rome between Nadal and Djokovic. Prior to this, Nadal has won on three occasions while Djokovic has won on two occasions.