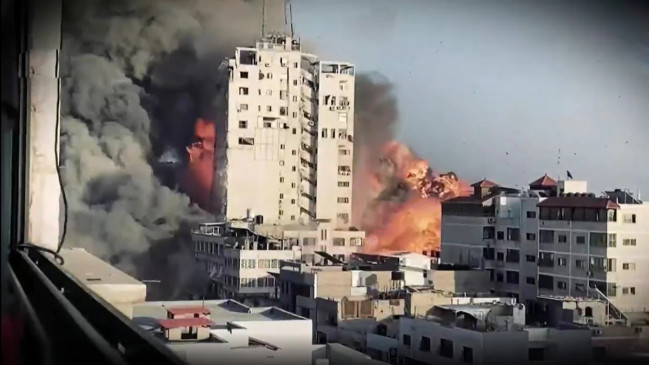 Digital Desk, Gaza. These days, Coronavirus has created a furore these days. Countries are engaged in every effort to protect against this. But amid this epidemic, there are warring situations between Israel and Palestine. Palestinian fundamentalist Hamas fired more than 1,600 rockets into Israel this week. In response, the Israeli army has begun preparations for an all-out attack. On Friday, Israeli tanks and thousands of troops reached the border of Gaza.

According to reports, Israeli tanks are continuously firing in the Palestinian territories. At the same time, Israeli fighter jets are trying to destroy Hamas bases. According to the report, the Israeli Air Force has blown up the 13-story Hamas building by air strike. Major Hamas commanders were present in this building.

So far, 83 people have died in Gaza in attacks between the two countries since last Monday. At the same time, there are reports of 7 people killed in Israel. Hamas-run Health Ministry officials said the death toll in the congested coastal area has risen to 83.

In Gaza, the Health Ministry said in a message to reporters that since the tensions began on Monday, 83 Palestinians have died, including 17 children and seven women. 487 have been injured.

Palestinians attended the funeral of nine top militants of the armed wing of the Islamic Resistance Movement (Hamas) killed in Israeli airstrikes on Thursday, reported Xinhua.

Seychelles Vaccines Around 60 Percent of Population

Let us tell you that on Monday, Gaza militants fired more than 1,600 rockets in Israel. According to the Israeli military, the air defense system has been able to dismantle about 90 percent of the rockets in the air. The Israeli military said it attacked more than 600 bases in Gaza militants’ facilities and outposts. At the same time, the Israeli Air Force has blown up the 13-story Hamas building by air strike.