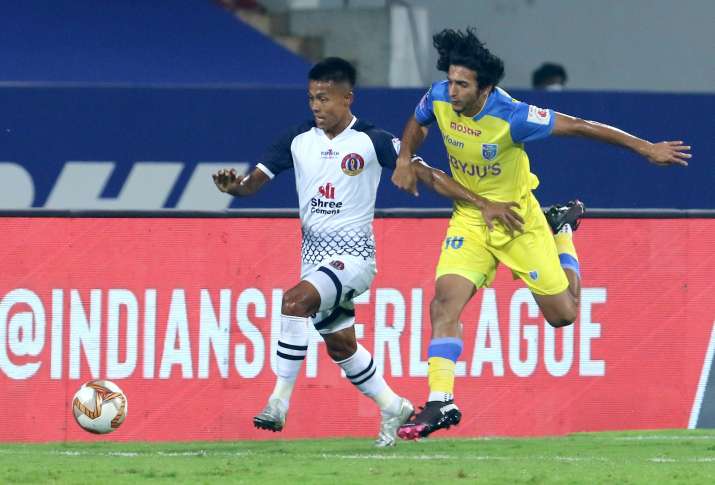 A goal scored by Jackson Singh in Injury Time saw the Kerala Blasters hold East Bengal to their first win in the seventh season of the Hero Indian Super League (ISL) and held them to a 1–1 draw. East Bengal retained the 1-0 lead to injury time in the first half with a goal goal from a Bakrey corner, but Jackson missed the first win of the season by scoring in injury time to save Kerala from defeat.

This is the second draw in six matches of East Bengal. The team now has two points and has now reached number 10 in the table. The team has also lost four. Kerala has drawn a draw for the third time in six matches and is now at number nine with three points. Kerala has received three defeats so far.

In search of their first win of the season, both teams came up with four changes. In the first half, East Bengal topped it and also took the lead due to Kerala’s mistake. In the first 10 minutes, East Bengal started attacking. Kerala also created a chance in the 11th minute, when its player Costa tried to get the ball into the net through a header, but the ball went over.

Two minutes later, Jacob Magoma and Mohammed Rafiq made a good move inside the box, but in the 13th minute Kerala’s corner of the corner unfortunately gave the ball into their own net. It seemed that Nishu Kumar, playing his 50th match in the IASL, also had a hand in this suicide goal, but this corner goal gave East Bengal a 1-0 lead within the first 15 minutes.

East Bengal intensified their attack after adding their third goal of the season to their account. In the 16th minute East Bengal’s Anthony missed his team’s double. However, by the 32nd minute, Kerala was dominating the match with 58 per cent ball possession.

In the 39th minute, Anthony once again hit a shot from the left side of the box, which was blocked. East Bengal maintained their lead until the first half thereafter. In the first half, East Bengal hit four shots while Kerala could take only one shot.

Kerala’s team landed in the second half with three changes. In the 52nd minute, Kerala had a chance to compensate for their suicide goal near the corner. The corner received a cross from Fakundo Pereira and the corner near the goal tried to put it through the header into the goalpost. But he missed a few inches. Six minutes later Kone received a yellow card.

Also read- PAK vs NZ, 2nd T20I: After the defeat to New Zealand, Shadab Khan advised the Pakistan team to learn from the mistakes

The match then moved to Injury Time, where six minutes of additions were added and Jackson scored with an assist from Sahal Abdul Samad to equalize Kerala 1-1 and prevent East Bengal from registering their first win of the season gave.