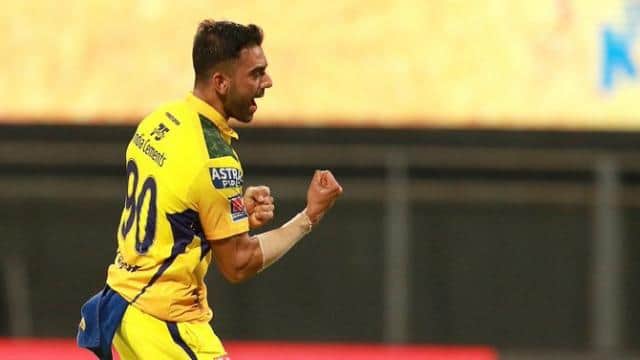 In the eighth match of the Indian Premier League (IPL) 2021, Chennai Super Kings defeated Punjab Kings by 6 wickets. Batting first, the Punjab Kings’ explosive batting order was shattered like cards in front of CSK bowlers and the team could only manage 106 runs after losing 8 wickets in 20 overs. For the team, young batsman Shah Rukh Khan scored the most 47 runs. In reply, Chennai achieved the target of 107 runs on the back of Moin Ali (47) and Faf Duplesey’s 36-run unbeaten innings by losing four wickets in just 15.3 overs.

IPL 2021: Mahendra Singh Dhoni will have to remain alert in the match with Punjab, a mistake can lead to a match ban.

Chasing a target of 107 runs, Chennai did not start well and the team lost the wicket of Rituraj Gaikwad on a score of just 24 runs. Rituraj was disappointed with his batting in the second match in a row and was able to score just 5 runs after facing 16 balls. After this, Moin Ali and Faf Duplesey shared a 64-run partnership for the second wicket and almost ensured the victory of CSK. Moin Ali was dismissed for 31 off 31 balls by Murugan Ashwin. After this, Mohammed Shami drove Suresh Raina (8) and Ambati Rayudu without opening the account within two balls. In the final, the pair of Sam Karan and Faf won the team.

Earlier, the Chennai Super Kings bowlers took four wickets for 26 runs in the Powerplay, justifying the captain Mahendra Singh Dhoni’s decision to bowl first. In this, the important role was played by Deepak Chahar who bowled Mayank Agarwal (0) in the first over and sent it to the pavilion. Even after that, he kept the pressure and allowed only two fours in his four over spell. In-form Punjab captain KL Rahul (05) was run out by a brilliant throw from Ravindra Jadeja standing on the short cover trying to steal a run. Jadeja then dived in the fifth over, caught a superb catch and finished the 10-run innings of Chris Gayle, which was Chahar’s second wicket.

Nicholas Pooran was dismissed for a second time, he caught Chahar’s short ball in the hands of Shardul Thakur at log leg. Deepak Hooda (10) was dismissed in the seventh over with an easy catch to Faf Duplessis and it was Chahar’s fourth wicket. Now the team’s score was reduced to 26 for five wickets. Shah Rukh Khan and Jay Richardson (15 runs, 22 balls, two fours) added 31 runs for the sixth wicket. Murugan Ashwin (06) then added 30 runs along with Shah Rukh Khan to help Punjab reach this score. Shah Rukh Khan scored 47 runs for Punjab and he was dismissed by Sam Karan in the last over.