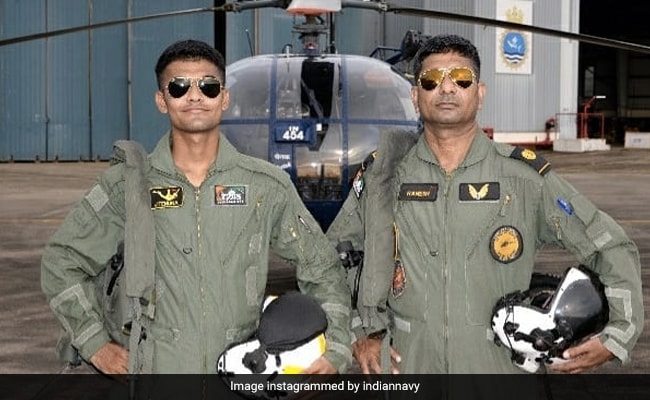 An Indian naval trainee not only got a chance to follow in his father’s footsteps, but also got training in naval flight under his father. According to the Indian Navy, a trainee named Jitendra Kumar completed a flying course on Navy helicopters after 21 weeks of training with a Chetak helicopter in Kochi, Kerala. He received this training under the supervision of his father, Master Chief Flight Diver Ramesh Kumar.

Ramesh Kumar has been serving in the Navy as an instructor and trains a select few divers to become aircraft divers on a helicopter. The Indian Navy posted a picture of the father and his son on its official social media handle.

Significantly, Jitendra Kumar graduated on September 30 along with 12 other flight divers. He completed six months of basic training at INS Chilka, when he was given the opportunity to further his training towards becoming a flying diver.

Jitendra Kumar completed three months training at a diving school in Kochi where he became the best performer in his course. He joined INS Garud, Kochi at Chetak Helicopter Flight, 321 UDAN for training on all aspects of aviation with special emphasis on rescue procedures during operation by helicopter.

The Navy wrote on its Instagram page, “Hard work with enthusiasm and focus helped her achieve the prestigious ‘Wings’ of the flight diver upon the successful completion of her training.” It was a historic and proud moment. This is the first father-son duo to serve actively as flight divers in the Indian Navy ”