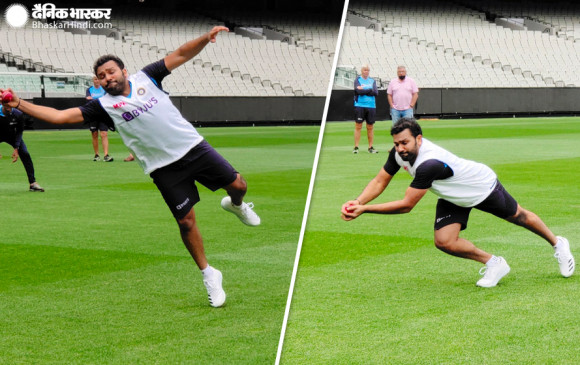 Digital Desk, Melbourne. Indian batsman Rohit Sharma has started practice on Thursday. The BCCI gave this information through its Twitter handle. Rohit was a 14-day quarantine in Sydney after his arrival in Australia from India. He reached Melbourne on Wednesday and joined the team.

The BCCI has posted a photo of the Indian team opener on Thursday while practicing catching. With this photo written, the engine is about to start. A glimpse of what will happen next. Rohit’s match fitness will be very important as he has not played any kind of cricket since the IPL final played on 10 November.

After the IPL, he went to the National Cricket Academy (NCA) in Bangalore and worked on his injury. He was in Quarantine after coming to Australia so he did not get a chance to practice. The team’s head coach Ravi Shastri has said that Rohit is not sure of coming into the final-11.

He had said, we will talk to him and see how his fitness is because he was two weeks quarantine. We will have to see what he is feeling, after that we will take a decision. Rohit played his last Test a year ago against Bangladesh at the Eden Gardens Stadium in Kolkata. It was India’s first day-night test match.