Digital Desk, Ahmedabad. India defeated England by 8 runs in the fourth T20. With this win, Team India has tied the 5-match series 2-2. Suryakumar Yadav scored 57 runs for India. At the same time, Shardul Thakur did not allow the English team to reach the target with 3 wickets. Batting first after losing the toss, the Indian team scored 185 runs in 8 overs in 20 overs. In response, the England team could only score 177 runs for 8 wickets in 20 overs.

Hardik Pandya bowled Sam Karan. He was dismissed by 3 runs. England’s 2 wickets fell on 2 consecutive balls. Shardul Thakur dismissed Ben Stokes on the first ball of the 17th over. He was dismissed for 46 off 23 balls. After this, captain Eoin Morgan was caught by Washington Sundar on the second ball. Morgan scored 4 runs.

For India, Suryakumar Yadav scored the highest number of 57 runs. He became India’s 5th batsman to put a fifty in his debut innings. Shreyas Iyer played a quick innings in the last over. He scored 37 runs off 18 balls. At the same time, Hardik Pandya scored 11 runs off 8 balls. Rishabh Pant was dismissed for 30 runs off 23 balls. He was bowled clean by Joffra Archer. At the same time, Suryakumar Yadav was out for 57 runs off 31 balls. He was caught by Sam Karan in the hands of David Malan. However, the catch remained quite disputed.

Rohit Sharma, Lokesh Rahul and Virat Kohli fail
Earlier, Indian opener Rohit Sharma, Lokesh Rahul and captain Virat Kohli failed. Virat was dismissed by 1 run. He was stumped by Adil Rashid at the hands of Jos Buttler. Rohit was out for 12 off Joffra Archer. At the same time, Rahul scored 14 runs off 17 balls. He was caught by Ben Stokes at the hands of Joffra Archer.

First bowler to get Rashid Virat stumped twice
Kohli, who hit a half-century in the last two matches, did not bat this time. He is out by scoring 1 run. He was stumped by Adil Rashid at the hands of Butler. India’s third wicket has fallen at the score of 70. India score 70-3 after 8.4 overs. Adil Rashid holds a unique record. He is the first bowler to stump Virat twice in an international career. Earlier in 2018, Virat was stumped by the pair of Rashid and Butler in Nottingham. 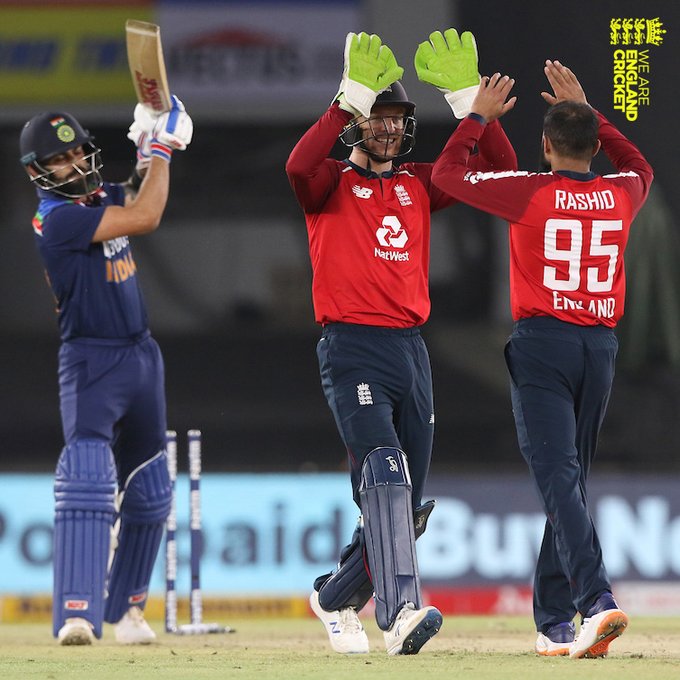 The Indian team is trailing 1-2 in the five-match series and to stay in the series, it is necessary to win it under any circumstances. On the other hand, England will want to win the match and make the series their name.