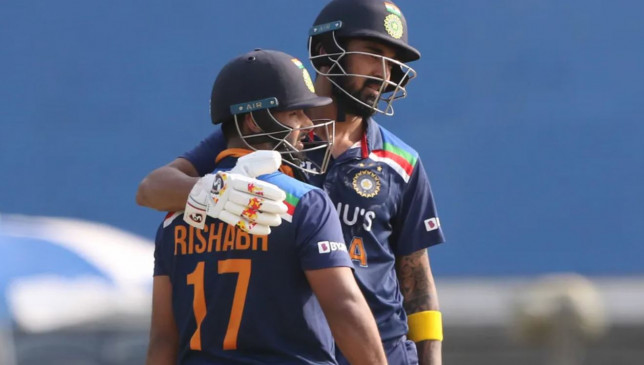 Digital Desk, Pune. The second match of the 3 ODI series between India and England is being played at the stadium of Maharashtra Cricket Association, Pune. Batting first after losing the toss, Team India gave England a target of 337 runs. Rahul scored his 5th century in ODI career. Virat Kohli scored 62nd and Rishabh Pant took the second fifty. For England, Tom Karen and Reece Tople took two wickets each while Adil Rashid and Sam Karen took one wicket each.

India’s innings
After losing the toss and playing first, Team India did not have a good start. Opener Shikhar Dhawan returned to the pavilion after scoring just 4 runs off 17 balls. He was caught by Ben Stokes at the ball of fast bowler Reece Topley. The Indian team got the second blow for 37 runs. Opener Rohit Sharma was dismissed for 25 runs. He was caught by Adil Rashid on the ball of fast bowler Sam Karan.

After the initial setback, Kohli and Rahul took over the Indian innings and the two batsmen shared a 121-run partnership for the third wicket. During this period, Kohli scored 62nd of his career and his second consecutive half-century of this series. Kohli was advancing his innings when Rashid ended his innings by getting caught by Jos Buttler behind the wicket. In the match, Kohli also got a living. Butler was dropped by Butler on the last ball of the 22nd over. It was Adil Rashid’s over. At this time Kohli was playing for 35 runs.

After this, Rahul and Pant batted in a blistering manner and troubled the English bowlers a lot. Pant completed the second half-century of his career in just 28 balls. After this, Rahul also scored the 10th century of his ODI career. After scoring a century, Rahul could not stay long and Tom’s ball caught the topple. Rahul shared a 113-run partnership for the fourth wicket with Pant. Shortly after Rahul, Pant also went to the pavilion, catching a catch to Jason Roy off Tom. Hardik was dismissed as the sixth batsman.

India made a change in the team
Indian captain Virat Kohli made a change in the playing-11. Rested injured Shreyas Iyer. Rishabh Pant got a chance in his place. The England team has landed with 3 changes. England captain ON Morgan and Sam Billings are injured. They were replaced by Liam Livingstone and David Malan. At the same time, Reece Topley was included in the team in place of fast bowler Mark Wood. This is the debut ODI of English batsman Livingstone. So far he has played only 2 T20 Internationals.