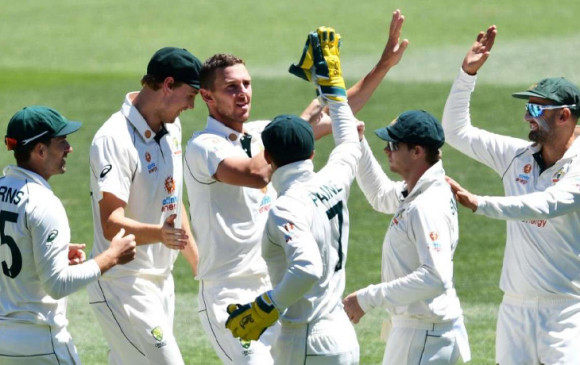 IND vs AUS: Indian team reduced to 36 runs, no player could touch double digit, target of Australia for 90 runs

Digital Desk (Bhopal). The Indian innings collapsed on the third day of the day-night Test being played in Adelaide between India and Australia. Team India’s second innings has been reduced to just 36 runs. The most unfortunate is that no batsman could touch the double digit. The Indian team, taking a lead of 53 runs in the first innings, could take a total of 89 runs in the second innings. With Mohammed Shami’s retired heart, Australia have got a target of just 90 runs to win this match. Captain Virat Kohli scored 4 runs and was dismissed by Pat Cummins. At the same time, three players Cheteshwar Pujara, Ajinkya Rahane and Ravichandra Ashwin could not even open the account.

Earlier, India’s lowest score in the Test was 42, which he scored against England at Lord’s on 20 January 1974. Neither Virat Kohli’s bat in the second innings nor Cheteshwar Pujara and Ajinkya Rahane were able to get a foothold on the wicket. Kohli scored four runs. Pujara and Rahane also failed to open the account. The highest scorer of the team was Mayank Agarwal who scored nine runs. Hanuma Vihari scored eight runs. None of India’s batsmen could reach the double figures. Hazlewood took five wickets for Australia bowling brilliantly.

If you’ve been busy for the past couple of hours … #AUSvINDhttps://t.co/T7ehZP6uDt