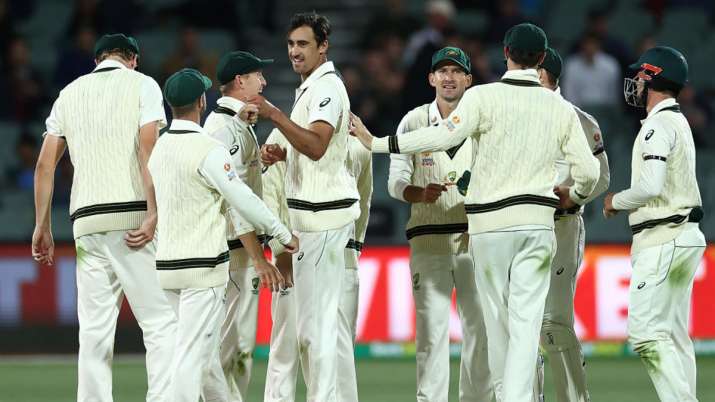 On the first day of the first Test match played in Adelaide between India and Australia, India have scored 233 runs at the loss of 6 wickets. For India, captain Virat Kohli scored the highest innings of 74 runs, while Mitchell Starc took the most two wickets for hosts Australia. Until the end of the day’s play, Riddhiman Saha is at the crease with 9 and R Ashwin scoring 15 runs.

The first match of the four-match Test series is being played in the floodlight. In this match, Indian captain Virat Kohli won the toss and decided to bat first.

Prithvi Shaw was bowled without opening the account on the second ball of Stark, who started the innings with Mayank Agarwal. Mayank Agarwal then added a few runs with Cheteshwar Pujara, but he was bowled by Pat Cummins’ first ball of the 19th over on a personal score of 17.

Pujara then shared a 68-run partnership with captain Kohli during which both batsmen faced 189 balls. Pujara fell to Nathan Lyon on the fourth ball of the 50th over. He scored 43 runs off 160 balls. Kohli was heading towards his 71st century of international cricket, but he was run out by Rahane on the last ball of the 77th over. After this, Rahane became the victim of Stark on a personal score of 42, while Hanuma Vihari returned to the pavilion after scoring 16 runs.

IND vs AUS: Virat Kohli becomes second batsman to do such feat after Viv Richards in Adelaide