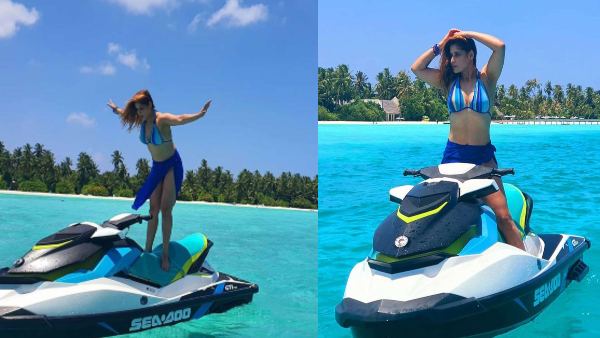 Govinda’s niece Aarti narrowly escaped the Oops movement, posing in a bikini and posing on a jet ski

Actually Aarti has been getting photoshoot done for a long time. Recently, she shared some of her pictures on Instagram, in which she appeared in a bikini. By the way, these pictures are from Maldives, where she went for a holiday a few days ago. During that time, he took a lot of photographs on a jet ski in the middle of the sea. At first she gave a normal pose, but after some time she felt like giving a new pose, for which she started trying to stand on the seat.

Even after a lot of effort, Aarti was not successful, due to which she took a photograph while sitting comfortably on a jet ski. Posting four photos on Instagram, he wrote that I tried to pose on a jet ski, but I failed. She then posted a video on Insta, in which she is seen driving a jet ski. A few days ago, he shared photo-videos related to this trip.

Quite a fan on insta

By the way, when talking about Aarti’s film career, he has worked on many big protections. Apart from appearing in Bigg Boss, Aarti Singh has been a part of many serials like Udaan, Mayaka, Devon Ke Dev Mahadev, Sasural Simar Ka and Utran. Apart from TV, she is more active on social media, due to which she has more than 13 lakh followers only on Instagram, where she also keeps reels with photos.