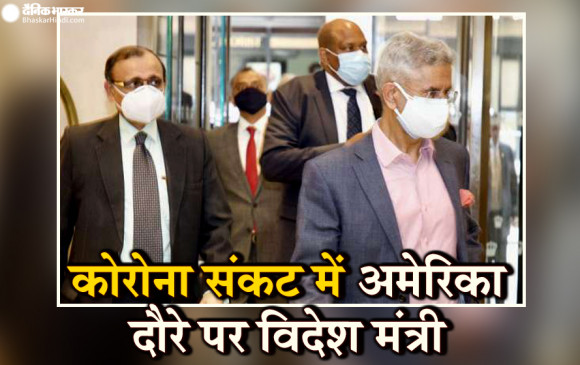 External Affairs Minister Jaishankar, who arrived on five-day US visit, will discuss many issues including vaccine

Digital Desk, New Delhi. Indian Foreign Minister S. Jaishankar has reached America this morning. He will be on a tour of the US for the next five days, that is until May 28. India’s Ambassador to the United Nations, TS Tirumurthy has given this information by tweeting. “Foreign Minister has come to New York for the first time since India’s entry into the UN Security Council on 1 January 2021,” he said.

In the midst of the Kovid crisis, Foreign Minister Jaishankar’s visit is also considered important for India’s vaccine needs. Especially when the United States has announced to provide 80 million vaccine doses. In such a situation, India will try to get a large part of it. Jaishankar is scheduled to meet US Secretary of State Tony Blinken, UN Secretary-General Antonio Gutaras and other top officials of the Biden government.

Emphasis on intensifying supply of raw materials for vaccine
This is the first visit by a senior Indian minister since US President Joe Biden assumed power in January. Jaishankar will hold talks with US Secretary of State Antony Blinken in Washington. They will discuss bilateral relations with members of the US cabinet and senior officials of the administration there.

During this visit, Jaishankar is expected to focus on increasing the supply of raw materials from the US to increase domestic production of anti-Kovid-19 vaccines in India. He will also discuss the possibility of joint production of the vaccine. According to the statement of the Ministry, during the visit of the External Affairs Minister, he has a program of dialogue between India and the United States with business forums regarding economic and Kovid-19 epidemic related cooperation.