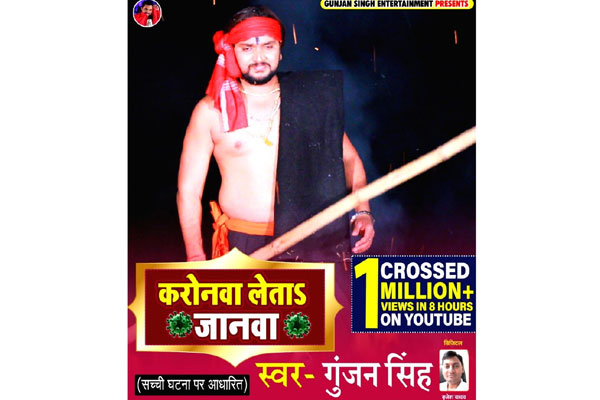 
Patna / Mumbai Across the country, people are troubled by the speed of the Corona infection. In this period, what happens to those families, whose everything is lost in this epidemic. This poignant pain has been expressed by actor and singer Gunjan Singh through his new video Song Karonwa Leeta Janwa.

This song of Gunjan is going viral. This song has been watched by over 10 lakh people in 8 hours.

The song has been released on the official YouTube channel of Gunjan Singh Entertainment. In this song, Gunjan Singh introduced the devastation caused by the corona virus through his singing. The lyrics of the song are written very emotionally.

Gunjan Singh, in this song, is seen telling the story of a family through ‘Kisansan Samaiya Ile Ba A Bhaiya’, in which the whole family gets shattered. Gunjan has also tried to give the message through this video that ‘all of you follow the lockdown. Do not go out of the houses and leave wearing a mask if absolutely necessary.

On the praise this song was receiving, Gunjan Singh said, “You should follow the rules made by the government in this epidemic because we too have lost this epidemic to many people in the industry.”

The song has been penned by Aman Albela while the music is by Shishir Pandey. The song is sung by Gunjan Singh while the video is starred by actress Nisha Singh with Gunjan Singh. This video is conceived by Rakesh Singh Maru. (IANS)