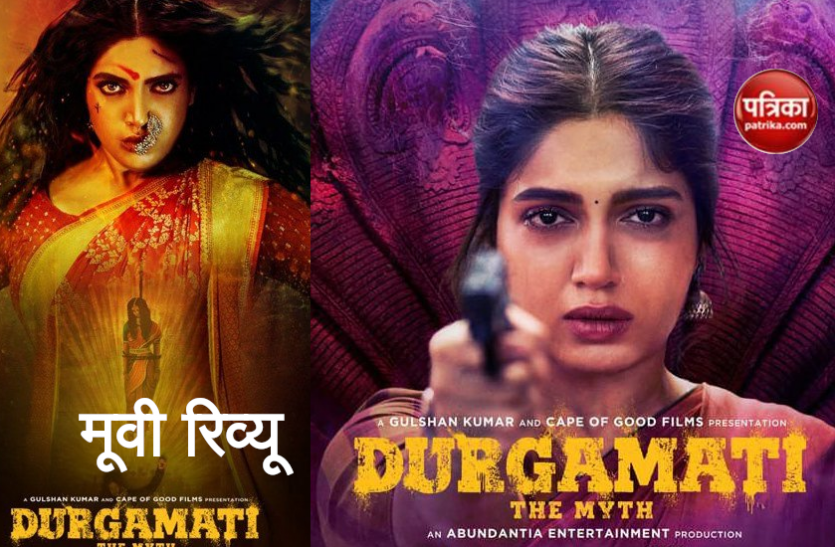 Durgavati Movie Review: The same stereotypical gimmick in the name of horror, then flashed

-Dinesh Thakur
Goya is competing among some filmmakers as to who can present more ridiculous gimmick in the name of horror. Who should spend their minds on new stories? Hit the films of the South and put them in such a way that Hindi should also become water. In Tamil, ‘Kanchana’ in Hindi was done in Akshay Kumar’s ‘Lakshmi’. This was done by Raghav Lawrence, who created ‘Kanchana’ himself (why allow someone else to do ‘Hindi’). Try the same childish and clumsy g. Ashok has made his Tamil-Telugu ‘Bhagmati’, which came two years ago, now in Hindi as ‘Durgamati’.

Land acting limits the extent of over acting
Seeing ‘Durgamati’ on an OTT platform on Friday broke the perception that Bhoomi Pednekar’s performance in the weak film also brings some relief. In this film, he has failed so much from the beginning to the end that the eyes of the over-acting people should be kept open. She is in the role of an IAS officer who does not appear in any scene. Throughout the film, she shouts so much and makes strange sounds that the scale of patience begins to break. ‘Durgamati’ is such an accident of her career, which she herself would not like to remember. This film, which defies logic, advocates tantra-mantra in the twenty-first century, and on the other hand exposes the corruption of politics so childishly that reel-by-reel itself is masked by its weaknesses. For the audience, this is nothing short of a two-and-a-half-hour sentence.

..So the ‘spirit’ will solve the case
In the name of horror, ‘Durgamati’ is a mansion away from the same population, where a spirit shouts. Such tricks have been repeated in so many films that there is no interest in them at all. The story is such that IAS officer (Bhumi Pednekar) is implicated in a case and put in jail. No one knows why the CBI takes him out of jail for questioning. This female officer starts having seizures and a leader (Arshad Warsi) comes under suspicion. Apparently, the reason for the tour is the same as what was in ‘Lakshmi’. There Akshay Kumar enters the soul of a eunuch. The same thing happens with land here. Only after the initial two-four reels is it known that the makers of ‘Durgamati’ have nothing new to show. All that is is so uninteresting, absurd and scattered that lifeless events hitchhike as they reach climax.

Whisper story, loose screenplay
Arshad Warsi, Mahi Gill, Jisshu Sengupta, Karan Kapadia, etc. were probably the first to mention whisper story, so they did not try to do anything more than Khanapurti in the name of the actress. Even if we do not change the map of the film, which has been spoiled badly by the grossly loose screenplay.

‘Bhagmati’ used to dub in Hindi
It would have been better, instead of making ‘Durgamati’ and ‘Bhagmati’ Hindi. Ashok would have dubbed the original film in Hindi. There is also a lot of gluttonous incidents in that film, but there is a fair amount of screenplay. Anushka Shetty’s performance was also exposed to the weaknesses of ‘Bhagmati’. In comparison to him, Bhumi Pednekar is one of the weakest links of ‘Durgamati’. Surprisingly, the land identified for ‘Bull’s Eye’, ‘Shubh Mangal Savdhan’, ‘Toilet – Ek Prem Katha’ and ‘Dum Lagaake Haisha’ showed no power of acting here.