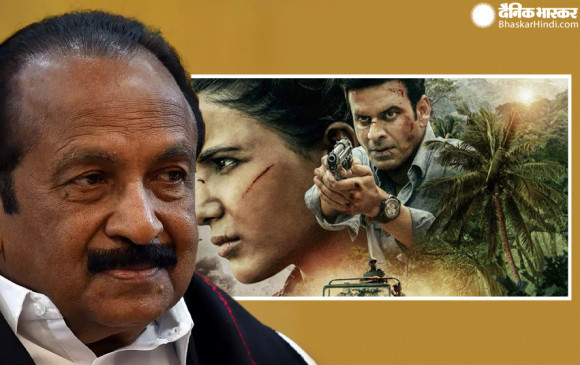 Digital Desk, Mumbai. The trailer of Manoj Bajpayee’s most awaited web series “The Family Man 2” has been launched and fans are eagerly waiting for its release. But now the controversy about the series is increasing. The demand for ban on this series has started increasing. On seeing its trailer, a ruckus started in Tamil Nadu. Where earlier people of Tamil Nadu had raised their voice against the trailer. At the same time, Vaiko, the Rajya Sabha MP from Tamil Nadu, is demanding to ban this web series. Vaiko has also written a letter to Information and Broadcasting Minister Prakash Javadekar to ban The Family Man 2. At the same time, trade analyst Ramesh Bala has posted this letter on his social media account. Let me tell you, this webseries of Man and DK Family Man 2 is going to be released on June 4 on Amazon Prime. But after the letter from the state government and the MP, its release seems to be in trouble.

what are the disputes

Actually, there are protests from Tamil Nadu over the series. People believe that, in this series, actress Samantha Akkineni has been shown as a terrorist and she has strong objection to Pakistan’s relationship with terrorist organization. At the same time, Vaiko has to say in this whole case, that the image of Tamil is shown in this series. She hurts the feelings of Tamil people. People of Tamil Nadu are objecting against The Family Man 2.

TN Govt writes to Union Govt to stop the release of # TheFamilyManSeason2https://t.co/8rZN02sEQN

Vaiko wrote in his letter that, I would like to bring to your attention the malicious, inappropriate and malicious content of Family Man 2. In which Tamil Eelam is depicted in a highly objectionable manner. The trailer of the series which has been released on social media aims to discredit and distort the historical struggle of Tamil Eelam in Sri Lanka. Their long-running fight for democracy and their renunciation have been deliberately weakened. Apart from this, there is no question of airing a serial which is full of insults to great Tamil culture. The pride of Tamilians from all over the world has been directly attacked by showing Tamil actress Samantha as a terrorist. Such abuse will not be tolerated. I request that you take immediate action, either stop its release or ban it. Not only in Tamil Nadu but all over the country.

Let me tell you that this is not the first time, when a ban is being demanded or a controversy has been raised about a web series of Amazon Prime. There was also a demand to ban the release of Saif Ali Khan starrer Tardav and Ashram before The Family Man 2. At the same time, users had trolled actress Samantha fiercely on social media regarding The Family Man 2 and #ShameOnYouSamantha was also trended on Twitter for her.