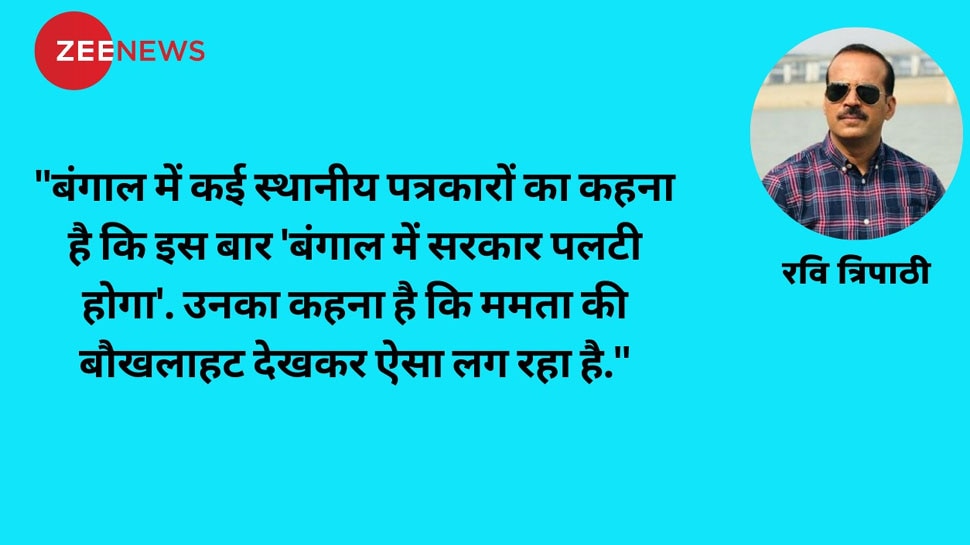 Bengal: Earlier the fight was Fifty-Fifty, but now the ‘atmosphere’ is changing

Kolkata: With the announcement of election dates, our entry took place in Bengal, exactly on 26 February. We reached Asansol from Jharkhand border via Delhi to Banaras and Bodh Gaya. We have dropped the meter of reporting of Bengal elections from here only. In a local bus going from Asansol to Durgapur, I rode with my cameraman and started talking to the people in it. Most people said that the atmosphere in Bengal is 50-50, anything can happen.

Mahajot held a rally on 28 February

After this, he also traveled in bus from Hooghly to Howrah, most of the people were able to avoid speaking or play safe by saying 50-50. In the initial days, only a few people who spoke about change met. Some also said that Mamta didi will come again, because she has done a lot of work for the poor and women. Reached Kolkata on 28 February, the same day Mahajot i.e. Congress, CPM. And Furfura Sharif had a joint rally in Kolkata. After the crowd gathered in this, the discussion of the existence of the Third Front in the Bengal elections was intensified. However, as the election progressed, the existence of the Third Front continued to fade.

After this I went to Murshidabad, Malda, Dinajpur, Siliguri. People everywhere except Murshidabad said that there is a fight between the BJP and TMC, and the case is 50-50. People said that anything can happen in Bengal elections. On 7 March, Prime Minister Modi’s first rally was at the Brigade Ground Kolkata. This day does not go unilaterally for Bijpi, that’s why Mamata Banerjee tried her best to make the battle 50-50 by placing a road show program in Siliguri on the same day and at the same time. It happened exactly the same. On 7 March, on one hand, Prime Minister Modi targeted fiercely at Mamta Didi and her government, on the other hand, Mamta Didi also attacked the Prime Minister fiercely. Told them from Corona to Syndicate. Here, whoever we talked to, everyone was saying that the matter is 50-50. There is no less, this battle will be tremendous.

After this we reached Nandigram. There was a nomination program of Mamta Banerjee on 10 March. Here too who asked who would win. Everybody used to say that the fight is tough, not to speak Parbo. Talked to some local journalists, then whoever wins will win by a margin of 5 to 10 thousand. That is, here too the matter was 50 -50. But by the evening of election day, it seemed that Shuvendu Adhikari trapped Mamta Banerjee here and I wrote on Twitter that after reporting all day here, I can say that Mamata Banerjee got axed on her feet after contesting from Nandigram. . But some of our colleagues said that anything can happen here. I assumed that the probability of both of them is 50-50.

By the way, in the first 2 phase polling, this picture was clear whether Purulia, Bankura, Jhargram or Western and East Midnapore. Bijpi has taken a good lead from TMC here. Out of 60 seats in both the phases, Bijpi and Amit Shah claimed victory over 50 seats. In a conversation with Zee News, Home Minister Amit Shah said that we are winning 200 more seats and BJP president JP Nadda told Zee News that there is a tsunami going on in favor of BJP in Bengal. Prime Minister Modi said that the TJP government was present at the swearing-in ceremony at the Tarakeswar rally. On this, Mamata Banerjee had also taunted that the Prime Minister is God or a great human being, which she has already come to know that the government will be hers.

The TMC and Mamata Banerjee’s team were confident that this atmosphere would be reversed by the third phase as the Kolkata Presidency had about 110 seats to be voted in the 3rd, 4th and 5th phase. TMC’s people breathed a little after the 3rd phase of voting. Out of the 31 assembly seats of the 3rd phase, TMC people claimed to have won more than 20 seats. However, Bijpi also claimed 50-50 in this phase. Based on a conversation with journalist friends reporting in different places, this picture came out that out of 16 seats of South 24 Parganas in the third phase, Trinamool can do a clean sweep, but Bijpi will do a clean sweep in Hooghly. Voting was held in 8 seats here. I was staying at Tarakeswar assembly seat in Hooghly for the whole day, from here, Bijpi nominated Swapnadas Gupta, who is one of the contenders for the post of Chief Minister when the BJP government is formed in Bengal. A total of 7 seats were voted in Howrah. TMC saw an edge here, but Bijpi claimed to win 1 to 2 seats in Howrah as well. Overall, TMC’s lead was clearly visible in the 3rd phase.

After this we set out to cover the fourth Fay poll in Cooch Behar area of ​​North Bengal. On the way, a coconut water was found in Nadia district. Drinking coconut water, we asked what will happen in the elections this time. He kept quiet for a while, but then seeing the comment on my forehead, he asked that you are a Hindu. I said yes, what he said was a big sign of Bengal elections. He said ‘all Hindus with Modi and all Muslims with Didi’. Here, let me make it clear that I went to Kali Ghat temple while leaving Cooch Behar from Kolkata, where the priest had put a vaccine on my forehead, seeing that the coconut boy thought that I was a Hindu. That is why he felt free to say what he said. By the way, this boy also indicated the Hindu-Muslim polarization in the election of Bengal. It may also happen that Nadia, Malda and Murshidabad have more Muslim population. This may be the result of Mamata Didi’s uniting with Muslim voters and voting for TMC, or after Mamata’s appeal to Muslim voters, Prime Minister Modi said in a rally that if I appeal to Hindu voters to vote unitedly Had I done, I would have got the Election Commission notice.

The road to Cooch Behar is about 17 hours from Kolkata, which is why we decided that we will stop in Murshidabad on the night of 8 March. Battal of Bengal i.e. 1757 Battle of Palasi took place in Nadia district just before Murshidabad. It is said that due to Mirzafar in this battle, Nawab of Bengal Siraj-ud-daulah lost the battle to the British. Mirzafar was the chief commander of Siraj-ud-daula, the Nawab of Bengal, and he was joined by the British. Because of which Siraj-ud-daulah lost this battle to only 3 thousand soldiers of British, despite the huge army of 50 thousand. That is why Bengal Chief Minister Mamata Banerjee is in her speech calling TMC leaders from BJP to Mirzafar and Traitor. There was curiosity in my mind that one should go to the place where the Battel of Bengal actually took place. When he reached there and started reporting, people said that why didn’t you go and ask about his family, about Mirzafar.

We asked where did those people meet and they told that Mirzafar’s family lives in Hazardwari area of ​​Murshidabad. After stopping at Murshidabad at night, in the morning we came to meet ‘Mirzafar ki Aulad’. By the way, the word ‘Mirzaafar ki Aulad’ is used for the person who betrayed himself here. It is also considered abusive, but we had to meet with the children of Mirzafar to know with whom he is with us today. Someone asked where the family members of Mirzaafar Bhai Sahab live, so the answer came in the morning, whose name are you taking, Bhai Sahab. Well, a person standing there showed the house of the younger Nawab. As soon as he entered through the gate of Hazardwari, it was the house of Syed Raza Mirza, the younger Nawab of Mirzafar’s family. When I asked the 80-year-old Mirza that there is a big discussion of your family in Bengal elections, with whom are you guys. He said non-stop that with Mamata Banerjee. Now you can yourself think with whom are Mirzafar’s children. I was doing the same story with whom Mirzafar was with Bengal elections. This story of mine was completed here.

After this, I left for Cooch Bihar to report the voting for the fourth phase to be held on 10 April. From morning itself, news of bombing and firing started coming at different booths. TMC workers started attacking the security forces at booth number 126 of Sitalkuchi in Cooch Behar. 4 people were killed in retaliation by the security forces. By the way, call it the result of the incessant incitement of Chief Minister Mamata Banerjee, it will not be wrong. Throughout the day, he was busy in the battle of this news. That is why there was no discussion with anyone about what was the trend of the fourth phase. In the morning, a call was received from the office to live on Mamta Banerjee’s Cooch Behar tour of Election Commission. While preparing to live outside the hotel, at the same time many journalist companions met outside at the tea shop. I asked what it looks like, who will win, now the election of 4 phases has been done. Right from a sad heart, a journalist said, ‘It seems that this time the government in Bengal will be overturned’. I asked why it looks like brother, then his answer was that it looks like seeing Mamata’s wrath. This journalist also became the basis of this article of mine.

Government may be overturned in Bengal

By the way, 50% of the elections have been held in Bengal and 50% is left. Here too, the case is 50-50. Because 4 out of 8 phases have been voted in Bengal and 4 phases are still remaining. In the first two phases, Bijpi took a decent lead. TMC performed well in the third phase, but in the fourth phase, BJP has done the job of reversing the battle by 50-50 battles. Not only this, BJP is Bardaman, Malda, Dinajpur, Siliguri, Darjeeling, Asansol or Durgapur except Murshidabad in all the upcoming phases. In all the places the result will be either 50-50 or in the lead. TMC can only win one seat unilaterally in 8 assembly seats in Kolkata city. In such a situation, instead of the battle of Bengal, the government is moving in a reverse direction instead of 50-50. I can say this on the basis of Experiance of Ground Reporting so far.

(Disclaimer: The views expressed in this article are the personal views of the author)