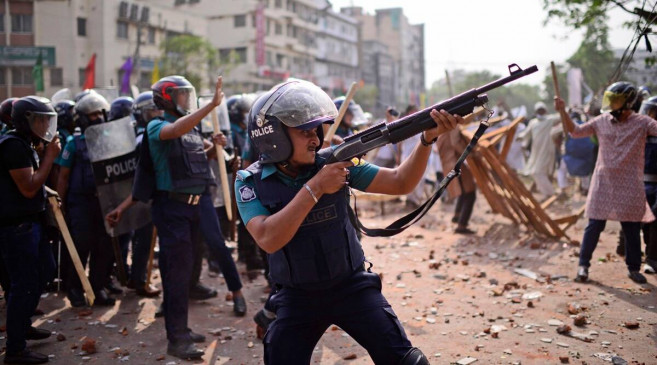 Digital Desk, Dhaka. At least 500 people have been injured in violence in Bangladesh during a nationwide bandh called by radical Islamist groups Hifazat-e-Islam and the banned Jamaat-e-Islami from Sunday morning to evening. Authorities have reported this.

Abu Bakar Siddiqui, in-charge of Paltan police station, told IANS, a Home Ministry official said that at least 500 innocents were injured in the attacks by the miscreants and that 500 members of the defense were accused of violence till Sunday evening A case has been registered, though no arrests have been made so far.

The bandh called by Hifazat-e-Islam also had its impact in Dhaka, Sylhet, Chattgaon, Kishoreganj, Norsingdi, Narayanganj, Brahmanbaria, Rajshahi and other districts. Students of Narayanganj Madaninagar Madrasa disrupted traffic on the Dhaka-Chittagong highway since morning by burning tires from Sanarpar to Shimrail intersection.

The members of the Jamaat, carrying the banner of safeguard in Sylhet, took out processions in various areas and also fired several crude bombs. Police arrested four people, but the police declined to comment. Due to the nationwide strike, no buses from Sylhet bus stand departed since morning. During this time, the supporters of Hifajat tried to disrupt the traffic at every entrance with sharp-edged weapons, bamboo and iron rods.

According to the four injured journalists of Noakhali, Hifazat took out a procession in support of the bandh at Chaumuhani Chowrasta and suddenly attacked the office of Noakhali TV Journalists Forum. During the protest, more than 50 people were injured in Kishoreganj, including 10 policemen. Apart from these, around two dozen members of the ruling Awami League also suffered injuries. Hifajat also attacked the party office located on Station Road and vandalized it with photographs of Bangabandhu and Sheikh Hasina, including its signboard.

Police fired tear gas shells and fired into the air to disperse the clash groups and additional personnel of police, BGB and RAB were also deployed in the district. A fire has also been reported from here. Speaking to IANS, Home Minister Asaduzzaman Khan Kamal said, “Upon investigation, we found that the leaders of these militant groups have previously been leaders of the Jamaat-e-Islami.”

The main leadership of organizations like the banned organization Harkat-ul-Jihad, Ansar-Ullah Bangla Team, etc. came from the Jamaat camp – who had been assistants of the Pakistan Army in 1971. And from behind, Jamaat-e-Islami terrorists had also hatched many conspiracies. Furthermore, with the involvement of Bashkarela, it has become clear that the terrorist organization that has spread terror and anarchy has now been incorporated into a new form. We are looking at all the issues and no matter where they are, no one will be spared.