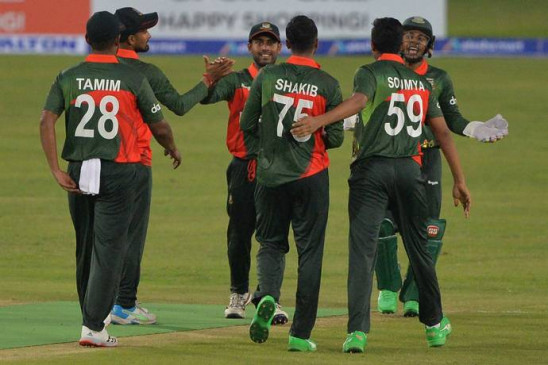 Digital Desk, Dhaka. Bangladesh defeated Sri Lanka by 33 runs in the first ODI. In this match played at Sher-e-Bangla Stadium, Bangladesh won the toss and batted first. Mushfiqur Rahim (84), Mahmudullah (54) and Tamim Iqbal had scored 257 for six wickets in 50 overs thanks to their 52-run stand. In response, Sri Lanka were all out after scoring 224 runs in 48.1 overs. Vanindu Hasaranga scored 74 runs from Sri Lanka.

Sri Lanka innings:
Sri Lanka’s start to chase the target of 258 runs was nothing special. Sri Lanka got the first blow on the last ball of the fourth over at the score of 30 runs. Mehedi Hasan sent a pavilion on Danushka Gunathilaka’s 21, catching a catch on her own ball. After this, the wickets fell in successive intervals. At one time Sri Lanka’s 6 wickets fell for 102 runs in 27.3 overs. However, Vanindu Hasaranga handled the innings after that and together with the tail batsmen, the score reached 200 runs.

Bangladesh’s innings:
Bangladesh did not start well after losing the toss and batting first. He soon lost the wicket of Litton Das (0). After this Shakib (15) also could not stay long. Tamim and Mushfiqur, however, added 56 runs for the third wicket to balance the innings. Meanwhile, Dhananjay D’Silva ended the partnership by dismissing Tamim for a total of 99. De Silva then dismissed Mohammad Mithun on the next ball without opening the account.

Mushfiqur then led the innings with Mahmudullah and the two batsmen shared a 109-run partnership for the fifth wicket. Sandakan broke this partnership by dismissing Mushfiqur. Shortly afterwards, De Silva sent Mahmudullah to the pavilion. Afif Hussain remained unbeaten on 27 and Mohammad Saifuddin scored 13 in Bangladesh’s innings. De Silva took three wickets for Sri Lanka while Dushmantha Chameera, Gunathilaka and Sandakan took one wicket each.