Arjun Kapoor shared this picture of Malaika Arora, such a reaction of actress came out


Malaika Arora and Arjun Kapoor are in Dharamshala, Himachal Pradesh these days. Both are sharing pictures of fun and fun on social media, along with spending quality time with each other. Recently, Arjun Kapoor posted a picture of Malaika on his Insta story and wrote – ‘Check Her Out’. Now Malaika has given a heart reaction to this Insta story of Arjun Kapoor. Along with this, many other pictures from the beautiful weather of Dharamshala have been shared on social media.

Earlier Malaika posted a beautiful picture with Kareena Kapoor Khan and Taimur Ali Khan. With this photo, he wrote the caption – ‘Pahar.’ Arjun Kapoor is shooting for his upcoming film ‘Bhoot Police’ with Jacqueline Fernandez and Yami Gautam in McLeod Ganj. Malaika also reached there to celebrate Diwali with Arjun. Malaika and Arjun are enjoying a mini vacation on the mountains. Whose pictures are also becoming very viral on social media. 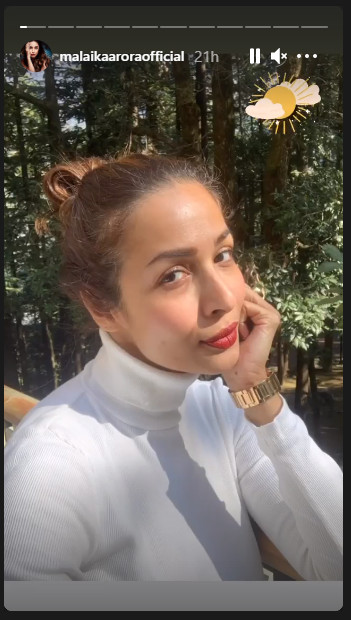 Kareena Kapoor and Saif Ali are also with Arjun and Malaika. Recently Malaika has also shared a latest photo with Kareena Kapoor and Taimur Ali Khan. Let us know that Malaika and Arjun are in a relationship for quite some time. A few days ago during a conversation with the fans, Arjun was asked when he is getting married to Malaika? Arjun had said, ‘When I get married, I will tell everyone. There is no planning for marriage right now, and even if I plan to get married now, it is not possible at such a time. We both have not thought about marriage yet. But like I always say that when I get married, I will tell. We will not hide anything but tell everyone and get married.