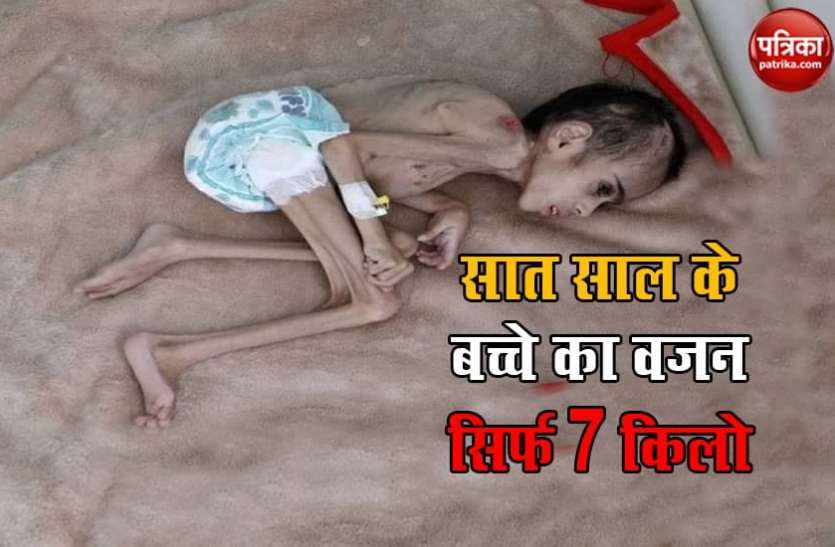 A seven-year-old weighs only 7 kg, knowing its disease will stun you.

New Delhi: In general, the whole family is vigilant for the health of children, but the situation in Yemen has become very bad. For the Yemenis who have been facing the war for years, so many bad days have come that people are finding it difficult to protect the health of their children. Here, the Yemenis, who have been suffering the ravages of civil war for a decade, are now suffering from a disease like cerebral palsy (Cerebral Palsy). Recently, a picture of a 7-year-old child is becoming viral, whose weight is just 7 kg.

This picture is of an hospital in Sanaá, the capital of Yemen, where seeing this child a lying on the hospital bed, no one will believe that this child is the victim of such a dangerous disease (Cerebral Palsy), of this disease. Because of this the child has become paralyzed, seeing the physical activity of this child, it feels as if it is a child of only six months.

In the year 1760, the famous surgeon of England, Dr. John William Little, told the world about this abnormality found in children.

It is said about this disease (Cerebral Palsy Symptoms) that the muscles of the arms and legs of children become stiff. Children suffering from this are unable to do any work and hold luggage or move. The biggest thing is that the more damage is done to the victim’s brain, the more disability is seen in it.

Cerebral palsy is a dangerous disease in which the disease progresses gradually and due to damage to the brain in the first 3 years, the muscles of the body get weakened and the body is unable to reconcile with the brain. Disability increases in the body. Every year 10 lakh children in India are affected by this disease.

This disease is still incurable

The exact treatment of this disease may not be done even today, but prevention is definitely possible. Apart from certain medicines and technologies, the use of braces can be relieved to some extent.