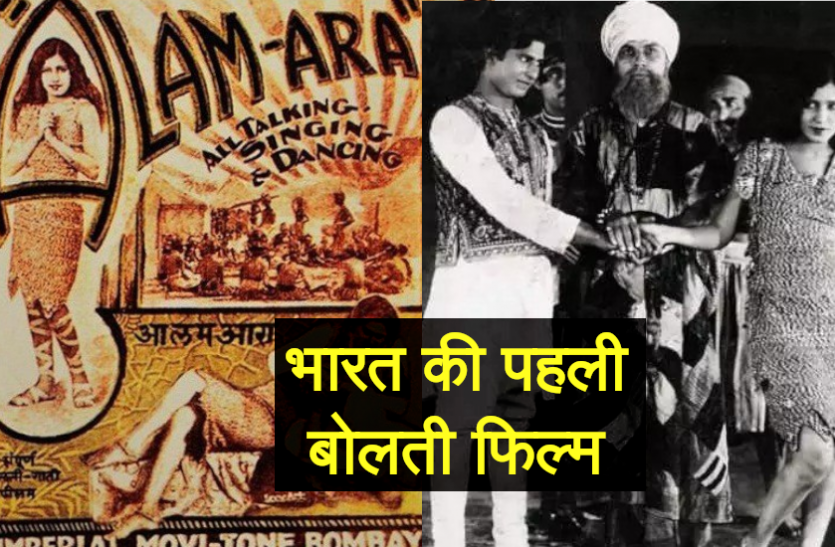 90 years of ‘Alamara’: tickets were black, people took to the streets, police had to struggle

-Dinesh Thakur
India’s first silent feature film ‘Raja Harishchandra’ came out in 1913. After 18 years, when the first spoken film ‘Alamara’ would have reached theaters, how curious would it have been at that time, the new generation could hardly imagine it. Those who have seen that era, tell that this film has created a bit of panic in the whole country. Promotional jokes like ‘Jubi Mili Juban Miley’, ‘Naya Ajuba Dekho’ and ‘Dumb Cinema Bane Laga’ were a gimmick for people. Everyone was eager to get acquainted with this new experience by reaching the cinema in the first leisure. The seeds of this desperation were planted on 14 March 1931. On the same day, a special show of ‘Alamara’ took place at 3 pm in the Magic Theater of Mumbai. The crowd had started breaking out of the cinema since morning. The police had to struggle hard to keep the crowd under control. The ticket rate was to be four, but in black market it sold for up to five rupees (the then five rupees were not less than today’s five thousand rupees). Ardeshir Irani, who created ‘Alamara’, had put this special show just to know the reaction of the public. In those days it was the rule of the British. Permission was necessary for such a show. When the public came out on the streets demanding to watch ‘Alamara’, after two weeks of the special show, the government allowed its regular public performance. The series began with the regular show at 6 pm on March 28, 1931. All the shows were houseful for seven consecutive days.

The film started with passion
History is often composed by obsessives. Where there is passion, the way of creation is also opened. Ardeshir Irani was obsessed with boyhood that he has to undergo something new in the field of cinema. This was the period when the Swadeshi movement was giving strength to the freedom struggle in India. People used to dream that we will also be able to watch indigenous films like indigenous clothes. Ardeshir Irani’s ancestors immigrated from Iran and settled in Pune. Ardeshir must have opened a shop for musical instruments in Gujar-Basar in Mumbai, but was always in a tizzy to make a small amount of money from somewhere, so that he could make a film. Suddenly his fortunes were reversed in 1903, when a lottery of 14 thousand rupees opened (it was a huge amount in those days). So, all was set. Ardeshir Irani went from ‘Baje seller’ to ‘film wala’. While wandering the streets of film distribution and silent films for 28 years, he created history by making ‘Alamara’.

Love story moving between intrigues
‘Alamara’ is a jugalbandi of two words of Persian and Arabic. It means the one who makes the world. Ardeshir Irani really made the world of cinema by making this film. The name of the heroine in the film is Alamara. The story is of the royal dynasty of the old Shah Adil Sultan. The character was played by Eliezer, while Jillobai and Sushila were in his two Begums. Amidst a variety of intrigues, the love story of Shahzade (Master Vitthal) of the royal dynasty and Alamara (Zubaida), the daughter of the warlord, keeps on turning. Prithviraj Kapoor and LV in the film Prasad also played important characters. Later these two celebrities made a different place in cinema. Both were awarded the Phalke Award.

Playback commenced from this film
The playback singing in Indian cinema also started with ‘Alamara’. Wazir Mohammad Khan, who played the fakir in the film, is considered to be the first playback singer. He sang ‘De De Khuda Ke Naam Pe Pyare’, which was shot on him. Most of the songs were sung by the heroine Zubaida. Sangeet Feroz Shah Mistry and B.C. Irani had prepared. Then there were limited instruments in film music – harmonium, dholak, tabla, flute and violin. Apart from ‘De De Khuda Ke Naam Pe’, the rest of the songs of ‘Alamara’ are no longer readily available.

Archives could not even print
Sadly, no print of this historical film is available now. Several years ago, news had emerged that the print of ‘Alamara’ was gutted in the fire at the Pune headquarters of the National Film Archives. The archives denied this, stating that he did not have a print of the film. Why was there not, this is also an important question. The archives had begun in 1964. Giving him prints of historical films
Should have tried. Now that all the celebrities associated with this film have traveled the world, getting print is a dream.

Later three more ‘Alamaras’ were made.
After Ardeshir Irani’s ‘Alamara’ three more films were made with this name. Director Nanubhai Vakil in 1956, Chitra, Daljit, Meenu Mumtaz and WM. Made ‘Alamara’ with Khan. He then produced ‘Alamara’s daughter’ (Nayana, Daljeet, Sasikala) in 1960 and again in 1973, ‘Alamara’ (Ajit, Nazima, Bindu). The story of these three films was different from the original ‘Alamara’.