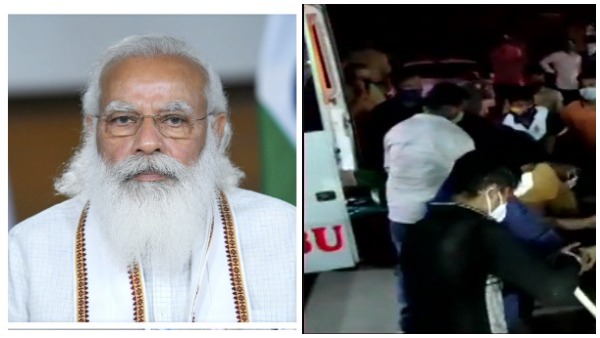 13 killed by fire in Maharashtra’s Kovid Hospital: PM Modi will give 2 lakh ex-gratia to the deceased’s family members

Mumbai, April 23: 13 patients have died in the fire at Vijay Vallabh Kovid Hospital in Virar in Maharashtra’s Palghar district. Prime Minister Narendra Modi has expressed grief over this incident. PM Narendra Modi has announced an ex-gratia amount of Rs 2 lakh from the Prime Minister’s National Relief Fund to the families of the deceased and Rs 50,000 to the seriously injured in the accident. This information has been given by the Prime Minister’s Office (PMO Office). Defense Minister Rajnath Singh has also expressed grief to the people who lost their lives in the accident. On Friday (23 April) around 3:15 am, a fire broke out in the air conditioning unit in the ICU ward of Vijay Vallabh Kovid Hospital due to a short circuit. In which 13 patients have died. Other seriously injured people have been shifted to another hospital for treatment.

Maharashtra minister Eknath Shinde has said that this is a very sad incident. It will be investigated. Action will be taken against the culprits. I spoke to the Chief Minister, he has ordered that anyone found guilty should not be spared.

PM @narendramodi has approved an ex-gratia of Rs. 2 lakh each from PMNRF for the next of kin of those who have lost their lives due to the hospital fire in Virar, Maharashtra. Rs. 50,000 would be given to those seriously injured.

There were 17 patients in ICU at the time of fire

Officials said firefighters extinguished the fire by 5:20 am. An official said there were 17 patients in the ICU when the fire broke out. He said four patients were rescued and shifted to other hospitals. Virar is more than 50 km from Mumbai.

Virar Civic Fire Brigade Chief Fire Officer Dilip Palav said the deaths of about 13 patients had been confirmed. Casualties are likely to increase. He said that we are not able to identify the gender of the patients.

According to the list of dead released by the fire department, Vasai Virar Municipal Corporation, 5 of the 13 patients were women who lost their lives in the fire. While the youngest was a 23-year-old man. The oldest was a 68-year-old man.

The eyewitness said- there were no fire safety measures in the hospital, nor was there any doctor

Avinash Patil, an eyewitness (eyewitness) said, there were no fire safety measures in the hospital like water splash and some measures were not taken to control the large fire. No doctors were also present and only two nurses were in the hospital when the incident took place.